Neil writes: Prior to today's ride Jon had advised everybody that it would be off-road and to pack fat tyres and low gears, hahahahaha.

After a long dry spell, the day started off with a brief but heavy bout of rain to settle the dust.  As myself and Vish made the start we found Jon already there and in high spirits.  A newcomer (Ash from Deptford, who had seen our website) joined us and then Carol and Steve arrived.  Four of us had heeded the advice and brought old mountain bikes and chunky tyres: this was going to be a slowish ride.

First port of call for the day was the forest up by North Mymms.  As we left St Marys Church Road, it became plain that some of us were going to have trouble.  It's always the way with off road riding - it takes a minute or two to get into it and then the rest of the ride is full of ‘can I do it?’

As a leader Jon is fantastic, he picks the right roads with the right conditions for the ride.  Nothing was too muddy, or chunky.  We had some road riding to do and we also went across a couple of fields.  It became evident to me that this was going to become a very entertaining ride.  The woods and forests had benefited from the earlier down pour of rain and smelt very lush and earthy.  The trees and foliage looked happy and fresh.

Throughout the morning we were followed by a angry cloud that sometimes did its best to make us feel like the heavens were going to open, although what rain we had was light and the sun came out before lunch.  On leaving Trent Park Animal Centre Cafe we took a sharp left at the fish ponds up and through the woods, past the Obelisk on the left (once used as a Dr Who location) and made our way to Whitewebbs Park.

On leaving the park Ash stopped to fix a puncture (using two of his 20 spare tubes in the process) then we were off on a newly surfaced track past Theobalds Park.  On the way to Goose Green we passed through some lovely countryside and came across some rather distressed bikers on Ermine Street.  Stopping to help them we found one was holding his bike’s left crank in his hand.  They were stranded without the correct Allen key, but at this point super Vish leapt into action and had the bike up and running in no time.

While that was going on I decided to wash my bike in a small puddle.

At Goose Green we were surprised to find that the pub wasn’t doing food (supposedly because the new owners hadn’t fired up the kitchen yet).  We sent a rescue party in to grab Steve before he brought any beer and headed off to Hoddesdon.  The White Swan in the town centre was a delight.  The food was very good and we all agreed it would be a good place for a winter ride.  We then took in some easy tracks via Brickendon and Newgate Street.

The total distance today was about 42 miles with 37% of this on a dozen stretches of off-road.View a larger map

On the way home we found a bridle path through Barbers Lodge Farm that had massive tractor tyre marks all the way along it, that was great fun.  Jon left us after this, then Carol and Steve left at Welham Green and three of us made our way back to Hatfield, making sure Ash got his train back to Kings Cross.

A great day indeed.
Posted by ShertsCTC at 14:56 No comments:

Neil writes: What a difference a fully inflated tyre makes.

Today's ride was fantastic and one of the most enjoyable of the year so far, with 15 riders making the most of the sunshine.  We all met at St Albans and welcomed two new people, Carol and Kath.

From the word ‘go’ it was clear we were in for a wonderful day.  The sun was shining and there were bright blue skies all day long.  Little fluffy clouds skittered across the skyline like random sheep.  As we made our way to coffee break we happened to pass Whipsnade Zoo.  This is a wonderful route as you get to see bison, wallabies and what ever else there is roaming around the zoo.  With a nice road zipping down past the area, it's a great descent with much for the eye to see.

Coffee break was at Page's Park Station in Leighton Buzzard and it was very nice out in the sunshine. 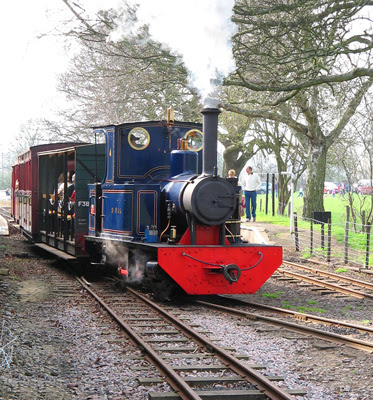 The Leighton Buzzard Light Railway Company was formed in 1919 and closed as a business in 1982. The railway was used to transport sand excavated at the Double Arches Quarry at Heath & Reach to the main sand washing plant near the station.

After the break it was decided that a small trip along by the Grand Union canal would be just the ticket and off we went, down to the water side and I have to say I thoroughly enjoyed it.  There really is nothing like riding along a canal tow path to make you smile, but it was while we were on this that the first of today’s hiccups happened.  As the group made off some of us were at the back not really paying attention to where we were going, I mean it's a canal path and there is only one way to go on it and that's forwards, but some how me and some others managed to get ourselves onto a bridge up a steep hill and onto a main road, where we found no other riders whatsoever.

Quickly we realised our mistake and headed back down to the waterside, where Steve valiantly phoned Carol and after a small trek we were all re-united with the main group.

Then we made our way to Eversholt.  I had no idea that this was right beside Woburn Abbey and we rode through the grounds, but thankfully not the safari park.  The trees in this area were amazingly massive and with the sun blasting down through them, this was a very relaxing part of the ride.  I think as we were going past Woburn there was a herd of deer in the distance (something I have never seen before).
After lunch Carol gave us directions on which way to go: left and left again (simple no?).  We did that and the second left was a lovely descent.  Several of us dutifully waited at the bottom for the others to catch up, only to realise when Peter was sent to retrieve us, that the others were waiting up the hill.  Our mistake was to zip down and not take the first right half way down. Oh well, I laughed.

From there on in the ride became very relaxing and extremely pleasant.  The rolling hills, lazy sunshine and a few random suicidal insects made for a great day out in the English countryside.

I'm hoping that there are going to be a lot more like this.

Posted by ShertsCTC at 14:50 No comments:

Stuart writes: A light rain was falling as I left for the start however this petered out after a few miles and as I got nearer to Wheathampstead the sun started to appear.  At the start Richard, Jon C, Vish, Neil and Tracey were waiting for me and then Peter arrived.

We set off northwards into a cold headwind through Gustard Wood and on to Kimpton where I took the back lane past The Holt to get to Whitwell. We went on via Preston and then dropped down to Little Almshoe and then onto Great Wymondley, Willian and Baldock.

As it was nearing eleven I then took the main route via Norton to get to Stotfold using the cycle track at the side of the road.

We were concerned that the elevenses stop would not be open given that it was Easter Sunday and Tracey had brought a bread pudding with her just in case it wasn't.  Fortunately it was open (although I think we were the only customers he had had all morning). Neil later commented that Stotfold had quite a lot of similarities to Royston Vasey (League of Gentlemen)!
After elevenses we used the cycle track to get to Arlesey and then Henlow. We carried on the road to Clifton where I pointed out Byercycles. After this we turned south and picked up a tailwind to Meppershall, Shillington and then to lunch at the Motte & Bailey in Pirton where the baguettes are to be recommended.
After lunch we went to look for the actual Motte & Bailey and then we carried on towards the Hitchin road. Here we turned right for a couple of miles and then took the track through the Wellburys and onto Great Offley.
The track is now part of a cycle route, is quite easily rideable and affords some great views across to Hitchin as you near Offley.

From Offley we continued through the lanes via Ley Green & Frogmore, passing the water cress beds to get to Emily's at Whitwell for tea. 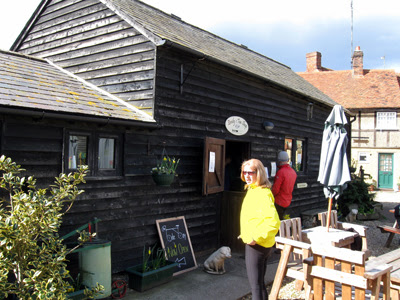 Tracey shared out the bread pudding that we didn't need for elevenses and everyone agreed this was delicious! Thanks Tracey!

After tea we continued towards Codicote. At the turn for Kimpton Mill I separated from the group to go back to Stevenage with everyone else heading south back to the start completing a 50 mile circuit.