Bill's ride to Braughing took full advantage of yet another sunny Sunday.  It was a shame the clocks had changed so we couldn't stay out longer without getting back in the dark. 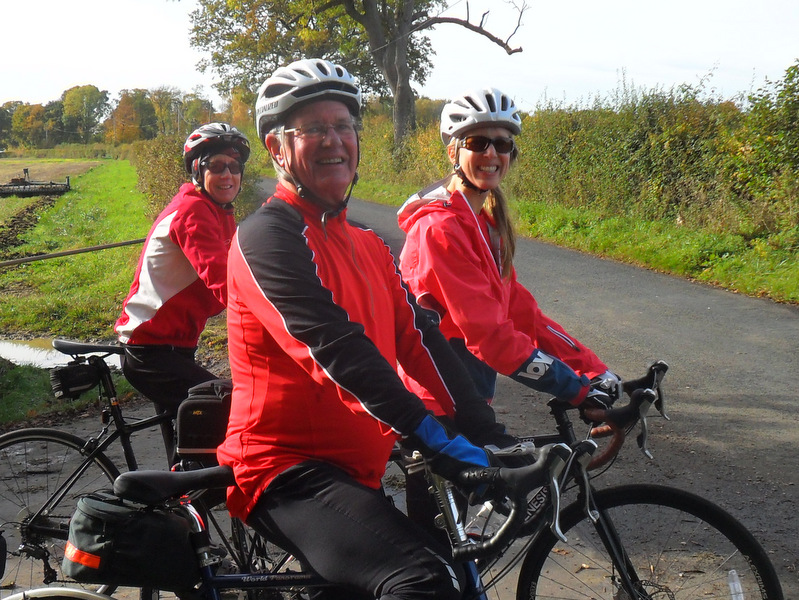 A thorn between two roses 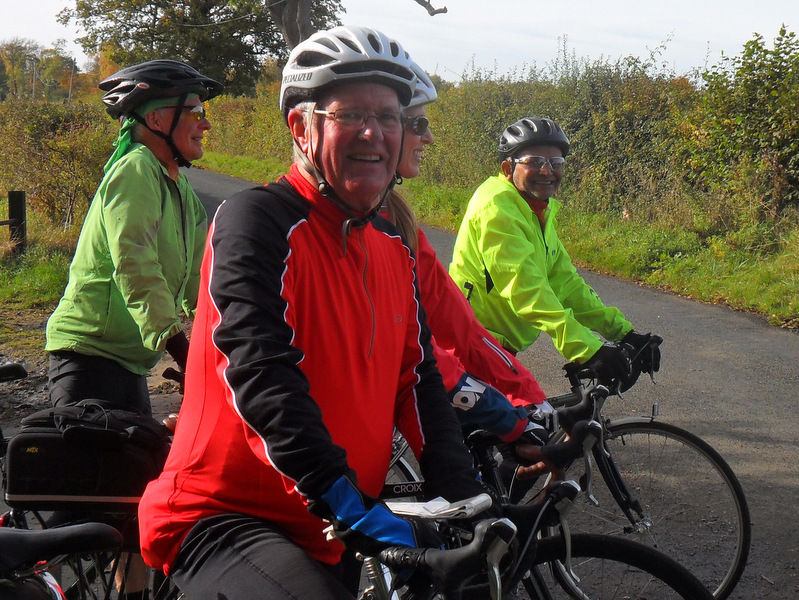 Vish emerges from the shadows

This is a rather odd one that turned out to be a short but pleasant ride down to Ozzy’s café in Little Chalfont. Four of us met at St Albans, but out of the four riders only one wasn’t feeling unwell. So the ride took a steady pace and we went down some of the usual roads. To start with though we headed out to the park and made our way up through there and as we did a jogger (yes a jogger) kept up with us and was happily chatting away.

We took a route that followed Bedmond Lane and then down into Nash Mills we rode; it’s always nice going up Rucklers Lane and from here we took the road into Flaunden where we ignored the usual route (a massive hill), much to one riders pleasure and we bombed down Chenies Hill and then up through Chenies to follow the Amersham Road for a bit. Soon we were in the café for a well-deserved cuppa and sandwich.

After our break it was decided best to go back as the group was feeling unwell, we headed back via the Grand Union canal. This was a lovely ride along the canal side and took us right through Watford, without seeing anything remotely urban, giving me food for thought for a ride next year. After a good deal of navigating we made our way back to King’s Langley and then it was just a trip up Tom’s Lane to retrace our tracks back to the beginning. A short but pleasant ride, and it is nice to report that the unwell riders were all fit and well for Bill’s ride the following Sunday.

Posted by ShertsCTC at 07:19 No comments:

It’s time for another saunter and 7 riders met at Morrison’s for the quick ride out to the café in Wheathampstead. We welcomed a new rider Fabio and we had a rather nice visit from Mr Ian Gow, it’s always pleasant to see him.

The ride got off to a nice steady pace with all riders happily chatting away; I took a very familiar route over to Ayres End via the Valley Road and the network of lanes at the back of the rugby club. One of the pleasures of doing rides like this is introducing folks to the countryside that is on their doorstep and listening to the amazement they express.

After Ayres End we headed into Wheathampstead via a lane that I’ve always wondered about, this lane could’ve led to Mars but thankfully it didn’t and took us up past the Elephant and Castle pub, then we just dropped down into the village for our tea stop. 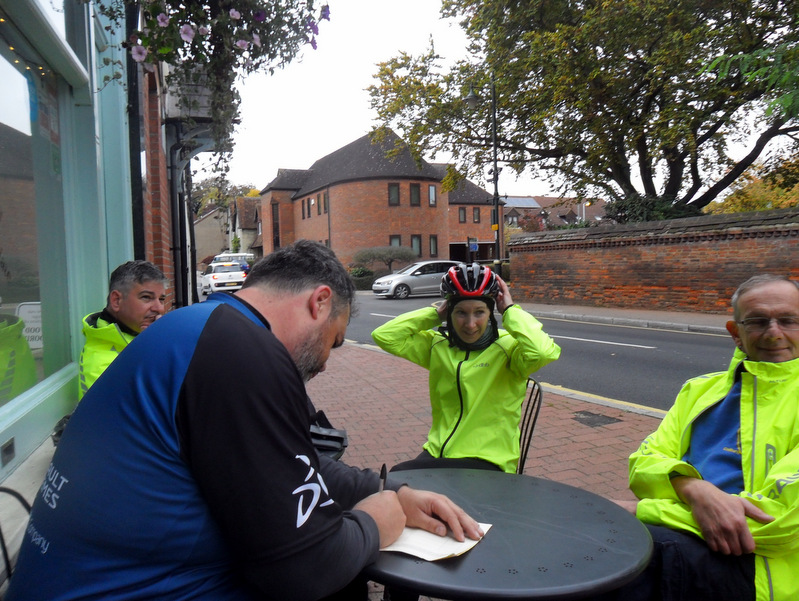 After break we made our way back via Beach Hyde Lane, then we dropped into Sandridge and took House lane to meet the junction at Jersey Farm. On our way to the cut through that takes us up through Oaklands Collage we encountered the 5 miles to Fabulous group and for 10 minutes the two groups had a lovely little meet up as 14 of us went through the college grounds.

To finish off we popped onto the Alban way and headed back to the start. It was a lovely morning’s ride out.

Posted by ShertsCTC at 07:21 No comments:

A welcome return to dry sunny weather continued our recent run of good luck on Sundays and eight of us met at Panshanger Golf Club for our ride to Ardeley.  Meeting there rather than Hatfield meant we were soon into the quiet Hertfordshire lanes as we cruised through Tewin and Bramfield.  In Stapleford we noted the passing of The Woodhall Arms, where the owners of Papillon Restaurant sold up and retired in August.  As we then passed the former Three Harts pub in Stony Hills we reflected that these days we seem to pass more pubs that are closed down than those still in business. 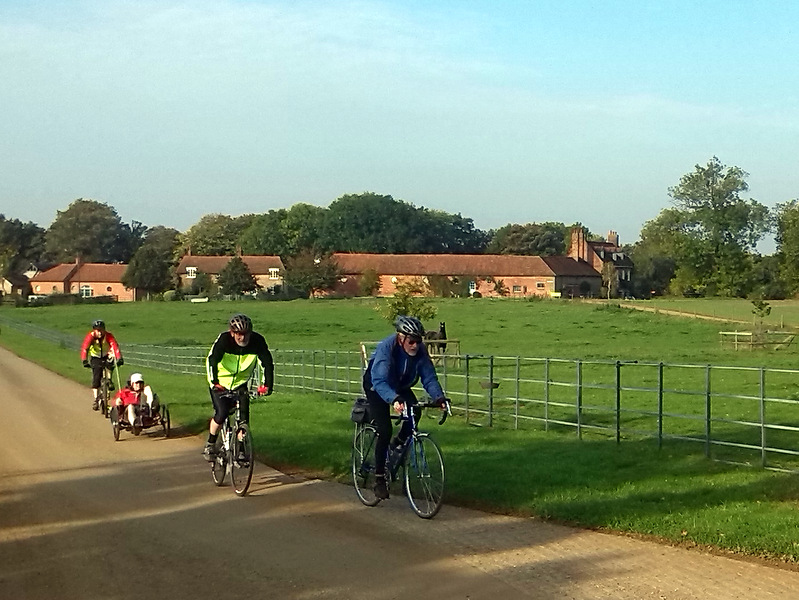 We crossed the busy A602 directly into the tranquillity of Sacombe Park, where the manor house was undergoing a complete makeover.  Then it was down to Barwick Ford and into Much Hadham to find ourselves at Ash Valley Golf Club.  We received a warm welcome and were quickly served with tea, coffee and bacon sandwiches as we relaxed in the wooden clubhouse.  This looked quite old, but the list of club champions only went back about 20 years. 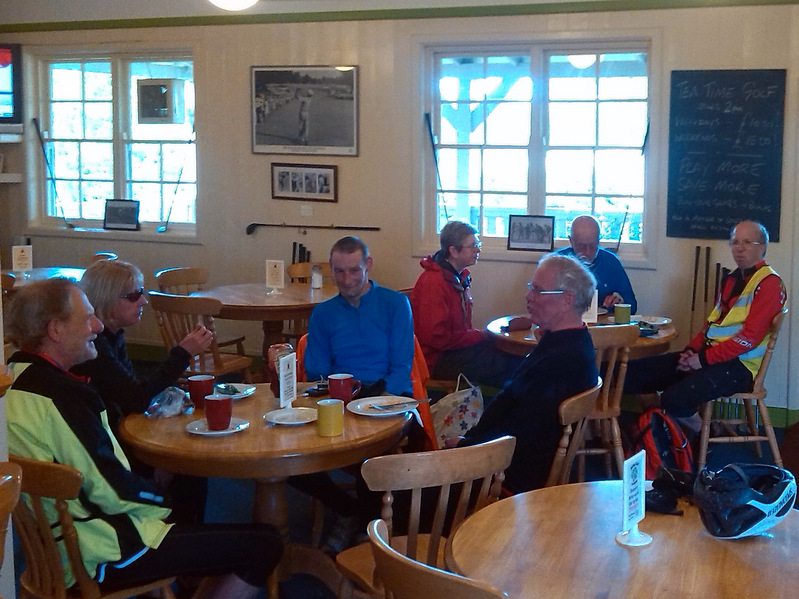 Geoff joined us here, and all nine of us carried on via Standon and Puckeridge to lunch at The Jolly Waggoner in Ardeley.  This pub is linked to the café at Church Farm opposite and we found we could order sandwiches to be brought over to us from there, which most did as the Sunday roast was almost £14.  No doubt it’s excellent real food, but rather unreal prices for cyclists on a club run.  Despite it being mid October the sun was keeping it just about warm enough to sit out in the pub garden.

We left rather reluctantly just before 2 pm and did a double take as we exchanged the usual greetings with a fellow cyclist coming towards us, then realised as he was passing it was Steve H, getting up to speed following a broken leg.

It wasn’t far to Codicote, so I put in a short detour via Benington and Aston to get onto the cycle track through Shephalbury Park in Stevenage, coming out at The Roebuck and climbing up to Old Knebworth.  After tea at Vanstones some went directly back to Panshanger via Old Welwyn and others towards Hatfield via Ayot St Peter.  The sun was still shining when we got home and it had been an enjoyable circuit of less than 50 miles.

Posted by ShertsCTC at 07:23 No comments:

The weather was fine and sunny, as it sometimes can be in early autumn. There were 8 riders to set off from Hatfield.  Welcome to Maddie from Neil’s Saturday group on her first Sunday ride. We had hardly gone a mile when Craig disappeared from the group. Jon and Peter went back to find him but he could not be found. (see below). We continued down the A1000 and followed Wildhill Road around the edge of the Hatfield Estate. Crossing the Essendon Road we headed to Epping Green then Bayford and joined the B158 to Hertford.  Passing through Hertford town centre we took the rough cycle path beside the river Lea. 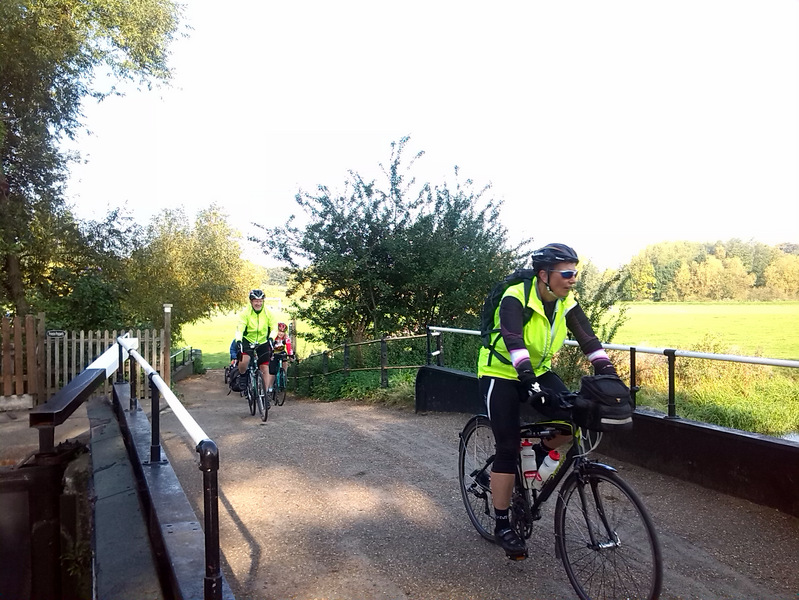 Crossing the canal near Hertford

There was very little wind and in the sunshine it was very pleasant by the river.  At Ware we followed London Road and Amwell Lane to Stanstead Abbots.  Here the road was completely blocked – why was that large JCB stuck into the front of a shop on the High Street? This turned out to be a failed Ram Raid that had happened at 3 am that morning and the alarm was still going off as no one dared enter the collapsing building. Continuing on to Roydon Marina for a tea break. There was Craig already having a cup of tea.  Group complete again. 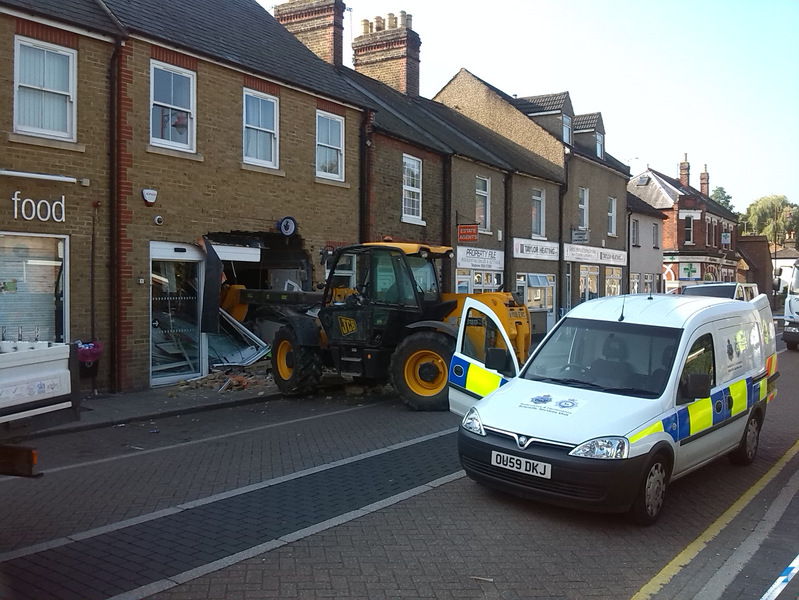 After tea we headed into Harlow and took the cycle path through to the south of the town and along Paringdon Road: first navigation error. I missed the turning into Commonside Road. This was the same mistake Jon had made a few weeks earlier. I was corrected by Jon as had Jon been by Carol. Back tracking we picked up the route, crossed Latton Common and Harlow Common, then headed north alongside the M11 to Churchgate Street. Still heading north along the Sheering Lower Road to Sheering and we arrived in Sawbridgeworth for lunch at The Gate pub.

After lunch it was west for Much Hadham via Allen Green and Green Tye: second navigation error. I missed the turn to Much Hadham after Green Tye. Rescued by Jon (again) who had realised my mistake. We backtracked and found the ford at Much Hadham and ascended Kettle Green Road at Hadham Cross and on to Barwick ford. Twice along this route a professional photographer took our photos, no doubt thinking we were taking part in some sportive – no, we do this every Sunday and it doesn’t cost us a penny!  Crossing under the A10 we headed to Whitehill Golf club for a much needed afternoon tea break.  Jon urged me to pose for a photo of my cycling jersey after my recent return from LEJOG. 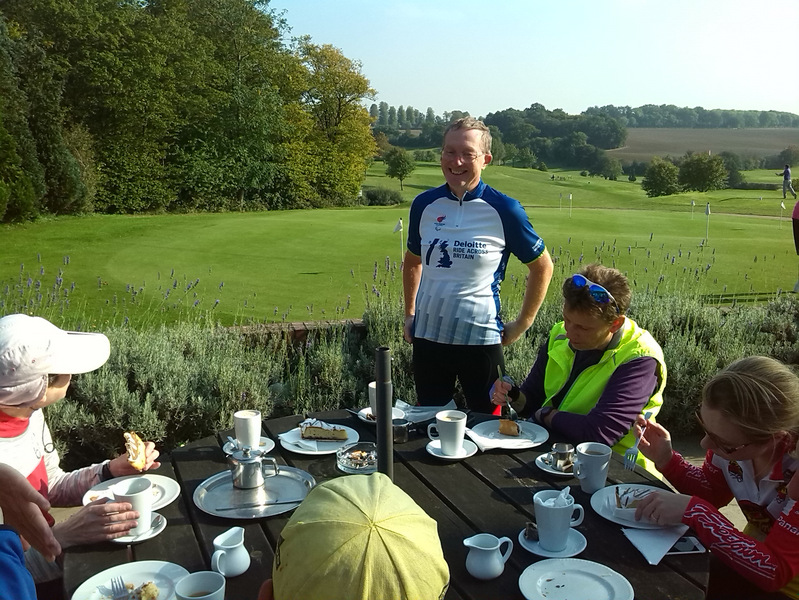 Mike with his LEJOG shirt

I was intending to head back through Whempstead and Watton at stone, but I don’t like that route much, so we went back to Hertford via Dane End down Stony Hills and Sacombe Road. Then we took The Old Coach Road back to Welwyn and on to Hatfield to complete a very enjoyable ride with lovely weather all day.

Posted by ShertsCTC at 07:26 No comments: