The ride start was outside Baldock train station making it suitable for riders arriving by train, car, or even bike. We welcomed Bob on his first Sunday ride and set off at 9:30 into an unseasonably cold north wind, appreciating the gentle climb over to the village of Ashwell, source of the River Cam.


On reaching Sandy, we stopped at Mama’s cafe, which we discovered last year. It’s good to support local coffee shops and the coffee was excellent – the quality being in a linear relationship to the time taken to produce it, so we had a long wait and plenty of time for chatting.  This time Adrian, our expatriate member now living in Bedfordshire, had arrived before us. 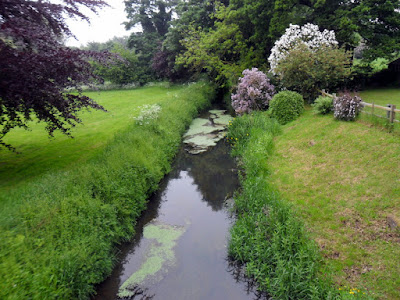 On departure, we crossed under the A1 motorway by using the cycle path on the old railway line to Blunham. We then headed due north to Rootham’s Green across windswept fenland before turning east to cross the A1 and reaching St Neots before 1pm. The town was crowded on this bank holiday weekend and the Weeping Ash pub had a 45-minute wait for food, so instead we used the Ambience Café in a park by the River Great Ouse, praying for the sun to come out.


Leaving St Neots, we were soon picking up a tail wind as we headed south past Yelling, where we had seen the veteran tractor procession last year. No sign of them this year and Steve was very disappointed not to be able to use his pathetic ex-tractor fan joke again.

The mood lightened considerably as the sun came out and we were soon removing several layers as we headed for Waresley garden centre, where we enjoyed coffee on the sunny patio.  It was an easy ride back compared to last year, when we had a strong head wind on this stretch.  This time the hills between Ashwell and Baldock seemed very easy with a following wind and we were soon back at Baldock Station.  This had been Bob’s longest ever ride, which was hard to believe as he was up at the front at the end of the day, proving it’s much easier to go further when riding in a group.

Posted by ShertsCTC at 07:17 No comments:

With many of our regulars away in France, only four of us met at Hertford for our ride into sunny Essex.  I (Judy) was deputising as ride leader for Jon, who had a sick note.

We left Hertford on the scenic lane that leads through Goose Green to drop down into Hoddesdon.  One of the Hoddesdon town cafés had been taken over by mods, judging by the scooters outside. We then crossed the Lea into Essex over the newly renovated bridge at Dobb's Weir.  It's good to have this useful link finally open.

We were soon skirting around the southern outposts of Harlow.  The others chose to follow my roundabout route (avoiding kerbs) which was just as well as, on the other side, we found that the direct path had been closed for works.  We made Harlow Garden Centre (actually located just outside Harlow) in good time.  I stopped briefly to chat to an elderly lady with a cycling T-shirt and cycling ear rings, who proved to be an Essex B Forty Plus member, though no longer riding. 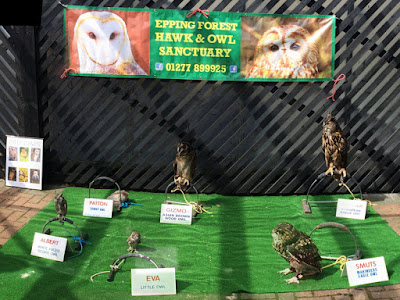 From the garden centre we looped around through the Essex lanes, seeing lots of cyclists but few cars (except when crossing A or B roads).  Our sightings included three two wheeled recumbents, a tandem and Liam from Stort Valley Section.  We reached our destination, the Viper at Mill Green, to find other cyclists already ensconced there.  Richard and I both retreated to the dense wood opposite to eat sandwiches, but did not spot each other. 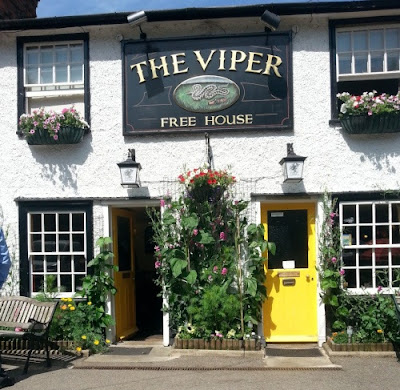 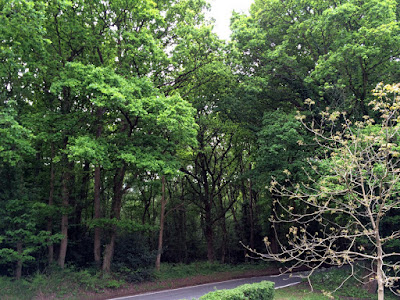 The Viper is surrounded by dense woodland

After just over an hour at the pub, we left.  The other group of cyclists were still eating and drinking.  When we approached our tea place, the countryside got hillier, as we went over the Toot Hill switch-back and climbed up to the Epping Road through Ivy Chimneys. 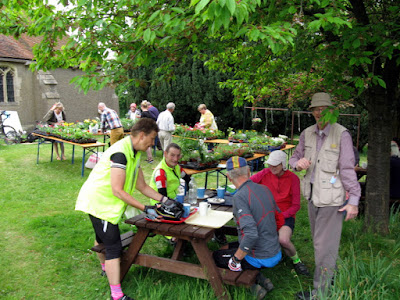 Tea was at the ever popular Upshire church.  The cakes were superb, as ever, the only downside being the long queues to get served.  Enticed out by the prospect of home-made cakes, Jon joined us at tea.  We met another former cyclist there who used to ride with the Northern Section (of North London CTC) and found we had some friends in common.  He was intrigued to learn that you can still get diamond framed steel bikes built with lugs.

Posted by ShertsCTC at 07:24 No comments:

The Sunday riders’ section of the South Herts Cyclists met in St Albans at 9.00 a.m. We welcomed new rider Janos to our distinctive brand of wobbling on wheels around the countryside and five minutes later off we set.

Destination Great Missenden: this is quite a stretch for a first break so the route was fairly linear. We made a beeline for Chesham via Nash Mills, Flaunden and Latimer. In Chesham it was a small job of navigating the high street and finding Fullers Hill, a nice road that steadily climbs up and meets Weedon Hill. We passed through Hyde Heath and made our coffee stop in Great Missenden in good time. A short stop, as there was only a handful of us, and we were on our way again.

Now I had a really quick way of getting to lunch, which involved popping out on the Rignall Road and taking the Askett turn off, we also ventured up Longdown Hill, which was pleasantly traffic free. After Askett it was a simple task of going past Longwick and stopping at the second bridge so that we could access the Phoenix Trail and make lovely mincemeat of the rest of the route, it really was very pleasant on the trail and everything was looking nice and fine in the sunshine. Soon we made Towersey and our lunch stop. 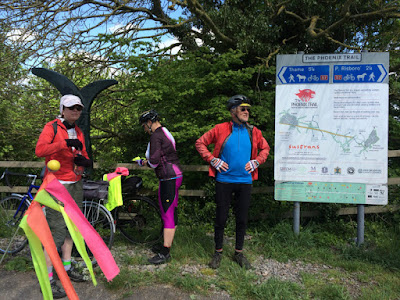 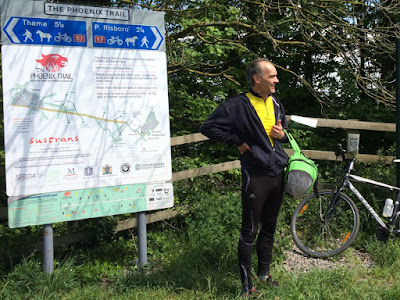 It was at lunch after enquiring about my route to Cholesbury that Judy let out a gasp of concern. ‘Oh my god! That’s a bastard.’ she wailed as I explained that we were going to go up The Hale.

We were soon off again, back up the trail and making our way towards Great Kimble and then onto Wendover. It was quite weird but it seemed that the whole route to Wendover and up the Hale was just one great climb, but the views we got were fantastic. Climbing up The Hale was nice and we kept to an even pace. As a note: Judy made it up the Hale first.

We were soon heading towards St Leonards and Buckland Common. It was a welcome break in Cholesbury for teas at the village hall. For our route back home we decided to miss Berko and head for Bovingdon, via Ashley Green. 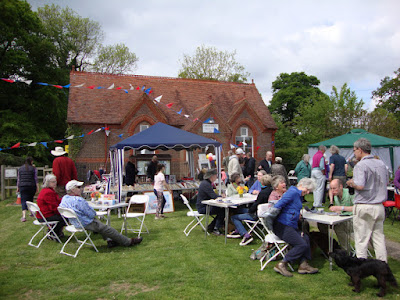 It was a great ride out enjoyed by all

Posted by ShertsCTC at 07:27 No comments:

Four of us met at Jenny’s in Hatfield for this gentle little jaunt to Hertford; it was good to welcome 3 new riders.

A lovely thing about riding in a group is that the leader can take some different roads to what you are used to. This broadens the rider’s knowledge of the area and is always greeted with surprise.  The ride actually stayed quite chilly throughout and was a very stark contrast to last Sunday’s summery sensation.

We headed off towards Woodside via Welham Green and Bell Bar. The route I chose took us to Woodside and up through Essendon, then we whizzed down Essendon hill. We followed the whole of the Lower Hatfield Road, through Bayfordbury and then into Hertford.

The café was buzzing as usual, bodies, tea, breakfasts and cakes everywhere. It’s great watching this place work at the speed it does, it’s no wonder it’s never empty.

The route back was a lovely trek along the Cole Green Way, this old train line was quite deserted and there was a fair bit of wild life about to keep us entertained. Again, a route not used by the other riders and they were pleasantly surprised. We left the track at WGC and wiggled around by Ascot Lane to get back to Hatfield. All in all we did 21 miles and I had some smiling faces at the end.

Posted by ShertsCTC at 07:30 No comments:

Nine keen members turned up at the start at Hatfield, as what can only be described as the first summer’s day this year! We took a longer but flatter route to Much Hadham Golf Course through scenic shaded lanes.

After a tasty well-cooked bacon sarnie, some sensible people applied sun cream before leaving, I wasn't one of them! Temperatures rising, we meandered 12 miles to The Bull Pub in Lower Langley Green for lunch, where we met the Cambridge CTC, also watering at this welcoming pub. 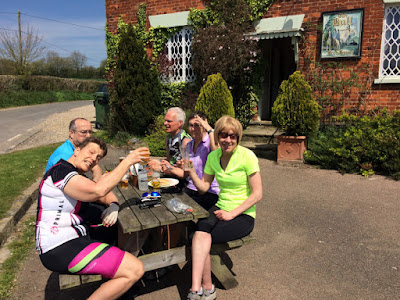 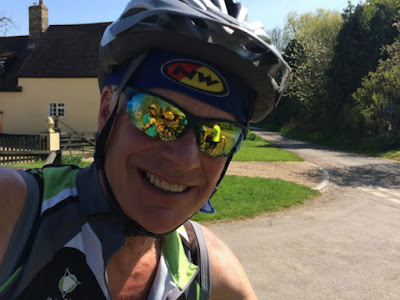 We then headed out to Little Chishall, Barkway and Sandon to Rushden Garden Centre Tea Rooms. 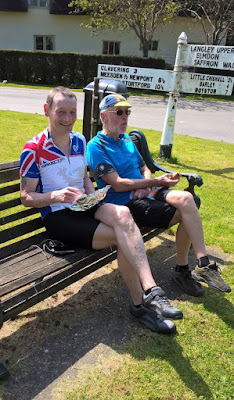 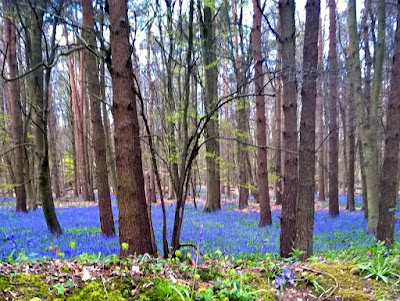 I believe we managed to cycle through 3 beautiful counties: Hertfordshire, Essex and Cambridgeshire, all looking at their best in glorious weather, by my reckoning 68 miles. Perfect conditions and company! That’s what cycling is all about for me.

Steve B led the ride to an interesting new, and good value cafe in Cheddington and then to Winslow for lunch. 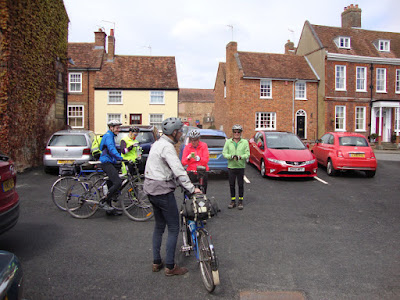