We started Sunday’s ride from Wheathampstead last week. And suddenly we needed to shake the moths out of our cycling shorts – after weeks of chilly weather it had turned seriously hot and sunny. As it was a fair way to our planned coffee stop in Stondon, we took a fairly direct route to Whitwell and along Lilley Bottom. It wasn’t long before we saw the familiar figures of Steve and Jackie also heading our way. Down the hill at Hexton we were soon into the Bedfordshire villages and then the golf club cafe in Stondon, a bit posher than many of our venues. I normally go for beans on toast on these occasions. This cafe goes in for embellishing this humble dish with a green spring of pea shoot placed on top. An unusual, possibly unique touch, but thanks for the extra effort chaps. Graham joined us here. It was also a treat to see Tracey (absent too long from our rides). 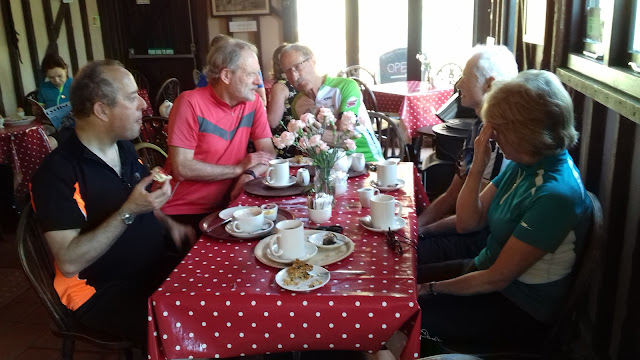 Next it was a matter of navigating through those strings of Bedfordshire villages, confusing to some, but thankfully Steve & Jackie knew the area and it wasn’t long before we took in Ireland, Haynes, Meppershall and then The Dog & Badger at Maulden – a nice obliging pub.

Heading back from Bedfordshire always involves a choice about which climb up the escarpment to pick. This time we went for the one from Barton and then back by way of Emily's.

Nine of us met for the ride into Hertford and it was great to see Jon and David for the first time this year. We also had the company of Rona, which is always a pleasure and I learnt that we have been successful in poaching a rider from British Cycling (not sorry Mr Hoy 😊 ).

We made good progress going through Hatfield, WGC and Panshanger. We then headed on to Tewin, the roads quietened down and soon we were just a group of happy bods cycling around the countryside on a lovely, hot, almost summers day. The point of this route became obvious as we made our way up Marden Hill, this road is surrounded by woods and covering the floors of the wooded area is a lovely display of bluebells so we stopped here to take in this beauty.
It’s not far from there to Bramfield and here we took the back road into Hertford on another fairly traffic free road, though what cars you do see tend to be moving fast. Once at Hertford we took a quick detour around the park then wiggled around the market to arrive at a packed Rose café.

This place never disappoints, always buzzing, sharing tables is always an option here. After a lovely brunch we went on our way again opting to go back via Hertingfordbury, accessed by the Lower Hatfield Road. The reason for this was because they are re-surfacing the Cole Green Way and this would have made for an extremely uncomfortable ride. We noted that The Prince of Wales (the former pub on the corner) in Hertingfordbury is now being worked on, with scaffold everywhere. Our route back was straightforward via Birch Green, Letty Green, the Old Coach Road and then onto the tarmacked section of the Cole Green Way. We retraced our steps through WGC to get back to Hatfield and after 23 miles we completed a great morning’s ride.

It was the first 9 a.m. start of the year which turned out to be a freezing cold but bright day. We took a familiar route from Hatfield through Welham Green and headed east through Bayford where we were overtaken by a group of Verulam riders. Several cyclists came in the opposite direction displaying numbers on their bikes with some even wearing shorts! We had trouble in passing through Hoddesdon where an almost endless convoy of cars delayed our crossing the roundabout on the A1170. Passing through aromas of Rye Meads sewage works we turned sharp right after the level crossing into Roydon Marina. Noting two familiar bikes already parked outside the renamed Boatyard Cafe we were delighted to meet Steve & Jackie who had cycled directly from their home.

The new-style cafe was a bit slow delivering the hot food and then as we prepared to leave we were surprised to see hail falling. By the time we got going again it was nearly 11.45 so on the way to Perry Green a new route was planned to loop round to Hertford for lunch instead of the planned Sawbridgeworth stop. The weather improved such that Ronny felt the need to have a quick sunbathe at Helham Green!

As we approached Barwick Ford we noticed a newly erected sign that was difficult to interpret. Cyclist's "what" have to use the footbridge? Note that HCC are responsible for education in the county.

After crossing the old A10 road we passed through Sacombe Park where Ronny took the interesting photo below of Neil. We made it to the Six Templars at 1.20 for lunch before cycling back along the Cole Green Way. As it had been so dry we thought we'd give it a try for the full length starting from  Hertford football club. There was evidence of resurfacing but, unfortunately it looks as if it is still going to be a so-called hard packed surface that will deteriorate again in the winter rains.

Posted by ShertsCTC at 18:31 No comments:

Weather on the Sunday wasn't too nice, but three fearless cyclists met in St Albans to head out into the grey weather. Among us was newcomer Solomos, who, after doing spinning for a while, wanted to get out of the gym. We crossed the northeast of Hemel Hempstead and followed the ridge along Gaddesden Row. I wanted to go on a road I've not used before and so we crossed the valley of the River Gade in Great Gaddesden. This added another hill to our tour, as we had to go up and down to reach Nettleden (afterwards I knew, why we didn't use the road before). From Nettleden we first quickly and then slowly climbed our way up to Beacon Hill, the northern end of the Chiltern Hills, from where we could enjoy a nice down-ride into Ivinghoe. Shortly after we reached our morning stop Jackie's Café, which unfortunately was closed. So we went back to the Waterside Café.
From there we continued north, facing some headwind towards Wing and Stewkley. For me the landscape of South Buckinghamshire felt a bit depressing with the wind-chill, the grey sky, the leafless trees, and the large fields. In Hertfordshire more variation between small woods, fields and meadows happens. However, once the road made a 90-degree turn to the west, things felt suddenly better and cycling became so much easier. The wind pushed us into Winslow where we had lunch at the Bell Hotel.

After food and rest we headed back out through the landscape of Buckinghamshire. The clouds became a bit thinner, but the sun didn't make it through. Two short, but steep hills had to be climbed, but once reaching Cublington we gradually made our way downwards to the Aylesbury arm of the Grand Union Canal. A few drops were falling when reaching our last stop, the Wilstone Farm Café. The place was warm and with the wood in the old barn quite cosy, however, we had to make a few more miles before home. We headed through Tring and then followed the often-used path through Berkhamsted and south Hemel Hempstead. Bunkers Lane was the last hill (where the GPS logging stopped) and after 120 km we were back in St Albans. We were lucky with the weather, only on the last few kilometres it was drizzling a bit.

11 of us met at Morrison’s on Saturday morning for the first fun ride of the year. There were 3 new faces, 1 returning face (nice to see Richard after a year), a couple of Rona’s group and some regular Sunday riders.

This is always a well-attended ride and this year I decided to do the ride in the reverse direction, so we meandered through the back streets of Fleetville a bit then picked up the foot/cycle path that leads from Marshallswick right down to Sandridge.

A quick waddle through said village saw us onto Coleman Green lane, a steady accent but a lovely quiet lane, and we took Beech Hyde Lane to get down to Wheathampstead. From here we made our way onto The Ayot Green Way. This great slice of countryside has been made even better by a good ‘ol fashion clean up. It really is a fantastic traffic free route to Ayot St Peter and when you get there it’s just a quick cycle up a hill then you are into Sherrard’s Park, another good traffic free route to WGC. We made use of Handside Lane and were soon at a well-deserved coffee stop.

The route back to Morrisons was some jiggery pokery at Stanbrough, then we connected to the  Alban Way, which at that time of day was relatively pedestrian free and very pleasant to ride along. The route was just under 19 miles and was a great success. To be repeated.