As we met in St Albans, a wild and woolly day, with the prospect of a soaking on the way back, led us to discuss if we really wanted to go as far as Chesham.  Most of us had remembered that the pub there didn't offer any food, so we had brought our own packed lunches.  Cyclists sometimes have some hard decisions to make - in this case it boiled down whether we should get a pub lunch nearby and have stale sandwiches when we got home.  Then Judy came up with the bright idea of going to The Woodman at Wildhill, another 'picnic pub' that was a lot nearer than Chesham.  Decision made, those who had forgotten their sandwiches rushed out to buy some and we were off.

Of course, Carol's planned route was now 'out of the window', so the speak.  So we made it up as we went along, with whoever had the best idea taking the lead.  Amazingly, we all ended up at the Woodman and enjoyed our picnic in the back room of this very friendly pub.

It all worked out well as we got home before the heavy rain arrived.

We didn’t have many out for the ride of Jan 22nd, it was supposed to be icy and that accounted for the low turnout. But three sturdy souls (fools) met at Hatfield for the start of a very pleasant but familiar ride. We made our chilly way to the off road track that leads to Hertford from WGC, the route I planned involved well used roads, thinking cars are warm and will melt the ice. Halfway along the track we came across a lovely winter sight and decided to cycle along the whole path to Hertford.

Once in Hertford, we headed for the tow path, which was a bit of a mistake as I wanted to take the main road to Ware, it was pleasantly clear and we had a good ride along there till we reached Ware. Going off road at this time of year can be quite fun as the ground tends to be rock solid and not slushy.

From Ware we took the main road that heads towards London, leaving it to follow Amwell Lane; this is a nice little road, which has a wonderful water feature, and it always looks peaceful there. This lane took us to Stansted Abbotts. From here we went through the high street and took the Widford Road. This has quite a surprising climb to it; I had to undo my jacket (shock). Soon we were in Widford and it was just case of following the Wareside road to reach the pub.

This is such an old worldly place, we thought that it was packed as the car park was full but no, they belonged to walkers who were due to come back soon. The landlord valiantly tried to get the fire going with some bellows but the wood was to damp and it was having none of it.


It was a nice morning’s ride out; we took a very direct route back to Hertford and retraced our steps to Hatfield.

Today’s destination is a new one and, for a change, seven of us are heading towards London, with a chance to explore some less travelled routes and tracks.

The King and Tinker is located at the edge of Whitewebbs Park, an ancient hunting forest, and apparently the pub was named after King James. It is rumoured that James I (1566-1625) once drank here.  The story goes that he lost his courtiers whilst hunting, and decided to take refuge in the alehouse. Here he shared his drinks with a tinker, who only realised he had the King as a drinking partner when the courtiers came back and found him! The pub is indeed pretty old and the story comes from an ancient ballad.

Our route there takes us south along NCR 12 to South Mymms, then east across the tribridge over the A1 to follow Trotters Bottom, Dancers Hill Road and Wagon Road. It is all very rural despite being inside the M25. It’s new territory for Trevor on his first Sunday ride and he has no idea where he is.

At the end of Wagon Road the cycle route link to The Ridgeway is still at the planning stage, so we climb Ferny Hill to The Royal Chase Hotel, where the off-road part of NCR 12 resumes.  It’s a lovely ride through the farm before joining a very well surfaced track through Hilly Fields and Forty Hall Park, where we follow Turkey Brook.

The pub was not as reminiscent of Fawlty Towers as some online reviews make out, although I wouldn’t say it was the warmest of receptions. But the sandwiches are fine and we spend a pleasant hour.  There is plenty to look at inside, including sketches purporting to be by Ronnie Wood and Bob Dylan.


Leaving the pub, we turn left into Whitewebbs Park and ride through the golf course.  Even Bill, who lives in the next borough, doesn’t know about this path. We then rejoin our outward route back to Wagon Road for the return to Hatfield.

Five bleary-eyed cyclists stumbled into the welcome warmth of the Waterend Barn and ordered black coffees to counteract the lingering hangovers caused by the excesses of New-Year’s Eve. The weather forecast was clearly Not Good but New-Year’s Day demanded a resolute spirit and there was no rain yet.... We set off through Verulamium Park and along Bedmond Lane, noting the unseasonable complete absence of fly-tips, and then via Hunton Bridge and Chandlers Cross to Belsize and Flaunden. 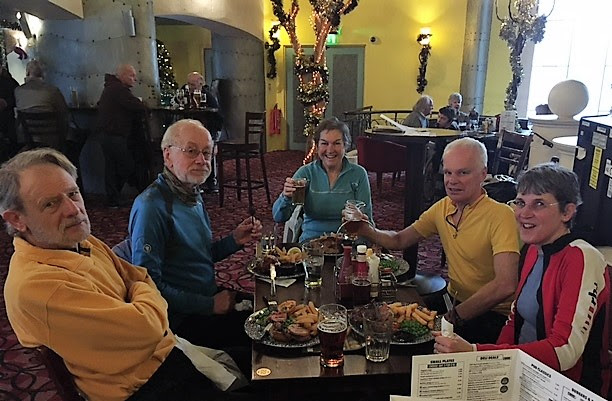 The intention had been to then turn left at the Bricklayers Arms to Latimer and go via Ley Hill, but time was pressing and a certain dampness had been detected in the air. Soundings taken from the riders revealed a unanimous preference for wimping out, so we turned right instead to head through Felden to Hemel Hempstead and our destination: the Full House, getting there just as the rain began to intensify and covering about 20 miles.

We were then joined by a sixth rider who had cycled directly from St Albans in the pouring rain, having decided his character needed building. Unfortunately, there was nothing else we could do but for the rest of us also to have our characters built during the return journey to St Albans.

Posted by ShertsCTC at 09:28 No comments: