Thirteen riders attended the first Saturday fun ride of the year and Danny Smith (Radio Verulam), who wanted to take some photos for the Sustainable St Albans week, also joined us. 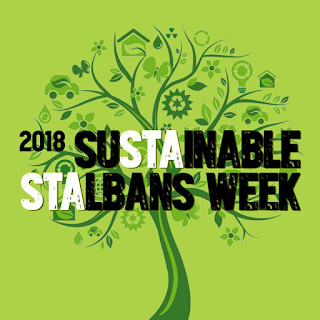 There was a nice spread of new and old faces along with three of Rona’s girls.

Before we set off a rider (whose bike had fallen over) found that her back wheel had popped off the frame. We quickly put it back on and in so doing we found her back disc brake was too tight, so we loosened it for her. This was appreciated a little further on as she commented on the ease of her cycling, thinking that she was very unfit beforehand.

We took the usual route down to Stanborough via the Alban Way.  I’m still amazed at how many people don’t know about this route. It’s only six miles to the coffee stop so it was a nice relaxed chatty ride. The weather was cold and it was threatening rain all the way. Due to the recent rain I chose to avoid Sherrards Park and the Ayot Green Way. We navigated Welwyn and made our way to Brockswood Lane - it goes past the golf club and has a cheeky hill.

We headed into Ayot St Peter and rode around the quiet lanes there eventually meeting the Codicote Road and making our way to Wheathampstead, from there we took a familiar route back to Sandridge. At Sandridge we took Sandridgebury Lane back to Marshalswick then navigated the streets back to the start. A very successful ride.

Posted by ShertsCTC at 10:00 No comments:

Sunday morning dawned damp, grey, a faint drizzle in the air, and the forecast was for proper rain later. I wonder if anyone would turn up for the ride on such a day. Maybe I could go home and do something in the dry? Keen cyclists are not so easily put off and it was a respectably-sized group who met up in Hertford. It was nice to see Mary and Dave again together with some regulars.

We set off from Hertford along the riverside path to Ware. A lovely, well used route, but any cyclist would have to complain about the quality of the maintenance. The surface is now so bad at the Ware end that it is practically unrideable, especially in bad weather. A lumpy, slippery cycle path running on the edge of a deep-looking river is not a good idea.

After complaining about a bouncy ride to Ware we took the old A10 north, turning off to Cold Christmas. Normally this quiet lane overlooking the Rib valley is picturesque, but visibility was limited today. At Much Hadham water was rushing down the road to Green Tye. But we got to Bishops Stortford and pondered our future while refreshing ourselves in the cafe - go on or go home? The weather was only drizzle wasn't it? We would go on. Passing out of the town we noticed the large housing development on its northern fringes.
At Manuden we followed the charming lane to Rickling, but by now it was raining seriously hard. Through the Pelhams we decided to cut it short and have lunch in Braughing. The Golden Fleece was busy and the food was good. From here it was straight back down the old A10 to seek dryness.