Hot summer coming to an end and autumn beginning: although sun was forecast it was pretty cold at the start. Despite this, eight of us met at the start in Hertford. After a short delay whilst Richard mended a puncture prior to actually starting we made good time through countryside to the south of Hertford. Then via Rye house and Roydon it was on to Harlow and navigating the cycle path through the new town to end up at the cafe in Old Harlow. Unfortunately Carol's rather unflattering photo makes it look more like "new Harlow".

Since we were for once ahead of schedule we abandoned the short route I had planned to the lunch stop in Stansted Mountfichet. Instead we took a longer route going to the east around Stansted airport, up to Elsenham (once famous for its jam) and then directly to the ‘Dog and Duck’ in Stansted M. The restaurant section was full so we ended up at a nice scrubbed wooden table in the public bar, so a proper pub type feel. What is more other than pukka Sunday lunches, the pub only does baguettes but because it was a Sunday these came complete with roast potatoes!
( Carol's note: While looking for a picture of the picturesque Stansted M village I found this photo which seemed very relevant to our lunch location. Story about this dog and ducks here )

So, well fed we left Stansted M. It is a pretty place with old buildings, its only flaw probably being it is too close to the airport. So we headed due west on very quiet lanes past Farnham and Upwick Green before heading south through the Hadhams. We were a bit early for the planned tea stop so went on to Ware. Our usual cafe had no cakes and said they couldn’t do tea either, seems to have turned itself more into a kebab shop. Tried another cafe which was too slow and ended up in a third, Cafe Frappe. The friendly owner showed us he had a back garden to park bikes in, accessed from the adjacent car park.

After this it was a quick dash back to the start in Hertford. For those of us finishing there we had done about 50 miles. Some had further to go, cycling back to St Albans and WGC.

Posted by ShertsCTC at 09:20 No comments:

The weather this weekend would have been described by other European nations as typically British. In 10°C warm rain Justin and Ronny went out for a short ride to the morning stop and back.

In the end the rain didn't turn out to be the most annoying thing, but the flooding of many roads was. This hid the potholes; hence we had to go slowly in many places. However, even in the rain the landscape was still pretty, like the small woods around Bedmond, the lovely villages, such as Flaunden, or the nice countryside around Latimer. Around that area the cold started to become more noticeable, so we were quite happy about the hill up to Amersham.

After few more kilometres we reached the elevenses stop in Great Missenden, where we warmed up and replenished the energy reserves. On our way back we followed the National Cycle Route 57. It started with the hill up to South Heath, which allowed us to warm up again after feeling quite cold on the first few meters.

With a tailwind we reached Chesham quickly and by then the rain had stopped. This turned out lucky for us, because a puncture needed some attention. After fixing it, we warmed up again on White Hill.

Unexpectedly early the sun broke through the clouds when we passed Bovingdon, hence before the last hill up Bunker's Lane it was time to put away the rain gear and we arrived in St Albans in nice sunny weather.

We were pleased to welcome new riders Gareth and Eamonn when we met at Wheathampstead for our Sunday ride, which would take in both Cambridgeshire and Bedfordshire. We set off through Codicote bottom, Easthall Farm and then along the Hitchin road for a bit to get to Great Wymondley and Willian. However we were soon disconcerted to find the road down into Baldock closed for road works. There was no sneaking round the edge of these works as the bridge over the A1 was securely sealed off, but there was a convenient bridleway that seemed to lead just where we wanted.
Taking this was a nice find - one to use again maybe, and we soon arrived at the cafe in Baldock. Here we found Steve and Jackie already tucking in. From here it was out to Ashwell, Guilden Morden and the open rolling countryside of Cambridgeshire.

Turning west towards Biggleswade we were confronted by a stiff headwind. The centre of Biggleswade keeps its historic feel and the Wetherspoons pub is in the centre. After pleasant refreshments, Steve, thank goodness, was familiar with the route back south through a baffling string of Bedfordshire villages and led us to the fringes of Hitchin. A quick afternoon tea stop and we headed back home.

Special congratulations to Gareth who had coped manfully with the first long ride he had ever done - conditions into the headwind were challenging at times.

From Hatfield we started along often used paths to Welwyn Garden City. There we met the runners of the Welwyn Half Marathon and partly shared the path towards Cole Green with the first starters and/or fastest runners. This wasn't a problem at all, as they had a pace only slightly slower than us. After crossing the river Lea the first hill up to Bayford challenged us. Enjoying the rural landscape we continued to Brickendon and into Hoddesdon, where we crossed the Lea again at Dobbs Weir then another hill challenged us.

Judy and Jon were waiting at the cafe, which we hadn't used before, located at the Ada Cole horse rescue centre at Broadley Common near Harlow.  As well as horses and ponies, including some characters named Dolly and Elvis, there was at least one donkey.  Yes, Del Boy was around, judging by the loud braying emanating from a nearby paddock.
The cafe was a useful find, very friendly for cyclists with indoor as well as outdoor seating. I think we'll be using it again as it's just the right distance from Hatfield when heading out towards Essex.  But instead of doing that, we all decided a half-day ride was favourite and turned back.
The weather was greyer and colder than forecasted until after breakfast, but then the sun was visible between the clouds and it became a nice day. On our way back from Ada Cole we passed through St Margarets, along Haileybury College, and through Hertford. From there we followed cycle route 61 along the old railway line between Hertford and Welwyn Garden City and then back into Hatfield.

Last year we did a rather super, hilly route and this year I changed it to make it more direct. It’s always good to venture up and around White Stubbs Lane and experience the rolling roads in that area. A slight drizzle accompanied us all the way and the weather sort of threatened showers. I wasn’t the only one who had brought a coat (just in case it did rain), but it was only threats. 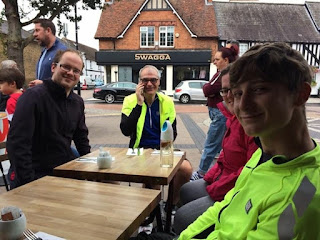 We visited a great new café / bistro on the High Street for us, who did some lovely paninis/snacks and teacakes. 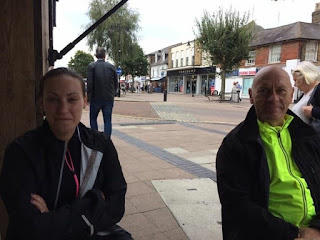 The ride back to Hatfield was a nice, steady climb all the way up through Goose Green, Monk’s Green and a drop down to the outskirts of Hertford. We tacked back to Hertingfordbury and took the familiar route to Hatfield via the Old Coach Road and WGC.

28 miles ridden in total, a lovely morning’s ride, the trees are beginning to look amazing.

It was a fine sunny morning albeit a bit cold when we met outside the Blacksmiths Arms in St Albans. There were only four of us at the start, so we made quick progress along a fairly direct route to Masterchef in Amersham. Always good efficient service saw us fed and watered promptly. I thought I recognised someone approaching on an old bike and sure enough it was Paul from Croxley Green accompanied by Jackie.

They joined us on the hilly route via Hyde Heath, Great Missenden and Prestwood before we found some exceptionally steep hills to reach the very friendly and good value Black Horse. We found a new route out of Amersham along some roads that made Harpenden look like a third-world country.

After lunch we took the flattest route possible  to tea which involved climbing over Cobblers Hill before a long haul up to the Lee where we stopped for the obligatory viewing of Admiral Howe. 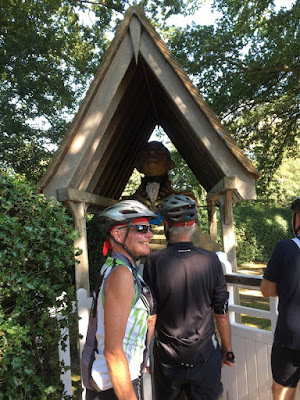 Afterwards it was plain sailing to Ashley Green where we finally managed to use the Church as a tea stop.

We were well fed with scones, jam and cream with tea or coffee for £3.50 all served to us at our table. the scones were so big, several of us took one home for the next day.

We got back to St Albans after a great day's ride in beautiful sunshine appreciating the beauty of the Chiltern Hills after about 64 miles.