This time we had 19 lucky cyclists on our excursion to the Essex coast.  That’s one more than our last visit back in 2014.

Since then our annual jaunts with Havering CTC in Essex have visited North Fambridge and Witham, but the ride to Heybridge Basin was worth repeating.

We met at the excellent café in Norton Heath, popular today with off-road motorcyclists, who roared off just before our departure.  We had 6 from South Herts, 5 from the 40Plus and 8 from Havering (of whom women seemed to outdo men, in more ways than one).

Our route was similar to last time, following NCR 1 through Chelmsford, except that Judy, on the Trice, refused to use the footbridge at Sandford Mill again. This is exactly the same width as her wheels and quite scary to cross, so she took the Baddow Road route hoping to meet us later. Amazingly, she arrived at the other side of the river at exactly the same time as us and merged back into the peloton without stopping.


We then crossed under the A12 and took a more northerly route than last time, allowing us to skirt around the Danbury ridge on some lovely lanes, which saved quite a bit of climbing. An added bonus was that all of the lanes were very well surfaced, even Cut-a-Thwart Lane, which had been terrible last time.

The route from Maldon followed the banks of the Chelmer navigation, quite narrow but well surfaced, and took us right into Heybridge Basin.  The sun was out, the tide was up and it was so much nicer than last time we were here. The two pubs and the café weren’t too busy, because most people were outside sailing, canoeing or simply sunning themselves.

Our way back avoided the 15% hill as we followed the coast through Maldon, passing the quay, the Marine Lake and the promenade to leave the town on the Mundon Road. It didn’t take long to reach the café at BHN via Purleigh, Cock Clarks and Bicknacre, although I had forgotten that it was actually quite hilly around here. We know about hills in Hertfordshire, but keeping up with the fast Havering females was a challenge. I was so glad we had postponed the ride for a week as that avoided the 30+ degrees of last weekend.

Service at the garden centre was swift and the tray bakes were loaded with calories, refuelling us for the rest of the journey through Ingatestone and back to Norton Heath after a special ride with a great group of riders.

We greeted a great crowd at Morrisons on a fantastically bright, sunny day and the last weekend of bike week. We had newbies, returnees and someone who hadn’t been out for a good while and we even played host to one of Rona’s fabulous girls. It was a meeting of all abilities, as we had a lass wanting to train for a triathlon, a regular who likes to take it easy and others wanting to push themselves a bit.

We set off and rode down some very familiar back streets and made our leisurely way to the lanes at the back of the Verulamium estate. After some quiet roads and around the farm track that leads to the Harpenden road, we followed that main road via the path beside it, then headed across to Ayres End Lane. 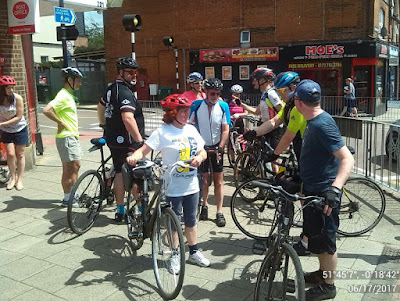 It’s lovely around the fringes of Nomansland Common; the lanes here are well shaded and offer a pleasant respite from the sunshine. A steady climb here and, for quite a large group, we kept together pretty well.

At break it was teas, coffees and cakes all round as we sat basking in the rays of the sun; everyone chatting away and making connections. Soon it was time to get back on the bikes. This time I left Wheathampstead via the shared path (part of the Lee Valley route) and I used Dyke Lane, passing Devil's Dyke, where invaders from what is now Belgium settled in 50 BC.  Strange to think that this pleasant, shady glade was the site of a massive construction effort over 2,000 years ago, and without any EU funding.

When we got to Sandridge we took Jersey Lane, the back alley that leads right into Marshalswick and cuts out many of the main roads. It wasn’t long before we were back at the start.

A short ride today but a very successful one, which I’m hoping to see some returnees from.

Posted by ShertsCTC at 10:00 No comments:

A sunny and breezy day greeted us as we assembled for our ride out into Bedfordshire. This time the wind was behind us as we headed north - first stop Barton-le-Clay.

Avoiding the well-trodden routes skirting Luton, we went through Harpenden and Caddington. Then descending by Chaul End (there is an amazing amount of house building going on around there) we found our way through the suburbs to pick up the Luton cycle path. Out through Streatley we whizzed down the serious hill at Sharpenhoe and were soon in Pete's Place enjoying a coffee.


Meeting Adrian and Jeff here was especially welcome as they unhesitating knew a great route across through some Bedfordshire villages to Stotfold where we were to try a new lunch venue for most - The Stag. This turned out to be a very pleasant and reasonably priced country pub - a good find.

Refreshed, we turned south to Hitchin, up the gentler of the hills into Preston and then the popular cyclists' watering hole, Emily's in Whitwell. As we found there a bunch of old regulars with the group, there was a bit of a delay before we headed off for home.

Posted by ShertsCTC at 07:58 No comments:

It was glorious weather for the start of bike week and we had a nice little jaunt into the countryside surrounding Hatfield, Wheathampstead and Gustard Wood. The skies were clear and the blueness was awesome. It really is a pleasure bumbling along the roads, listening to the birds and seeing just how verdant our county of Hertfordshire really is.

The route I took to Whitwell was a well-used route for us and offered us nothing but pleasant cycling; the stop at Emily’s was just as pleasant. This really is a great way to introduce the simple pleasure of experiencing our countryside on two wheels. 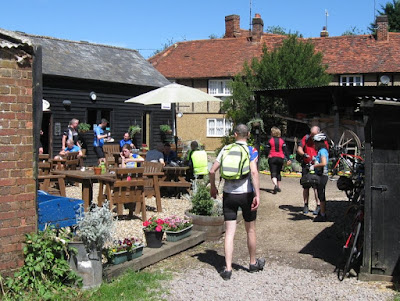 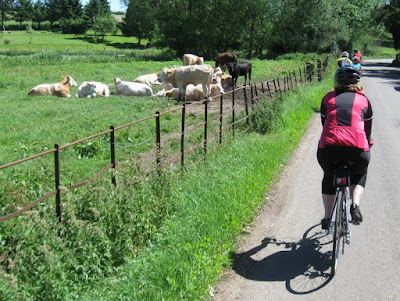 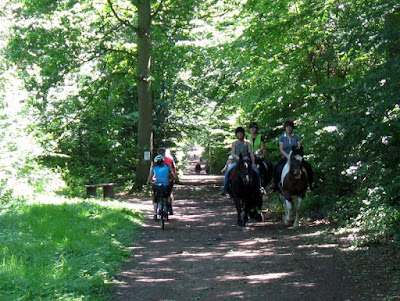 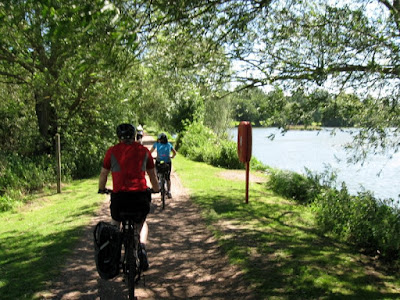 Our route back took us by Kimpton Mill and along the bottom road there. At the Codicote crossroads we headed for the Ayots and just up from there our party split with a couple making their own way home, while the rest of us pootled through the Ayots and took in Sherrards Park (this is a lovely off road route) to WGC and we made our way down to Stanborough lakes. The lake looked awesome, with people boating, fishing and sunbathing. We were soon heading back into Hatfield to complete a nice morning’s ride.

Posted by ShertsCTC at 07:39 No comments:

Essex is easy.  Getting there isn’t quite so easy.  With the prospect of homemade cakes on the way back and some easy riding around Essex lanes, we didn’t mind tackling a few hills to get to our first stop in the Lea Valley.

The route to Newgate Street had been fairly standard, but by way of a change we dived down St James’s Road in Goffs Oak, a lovely descent, passing some very large houses, then across the A10 and over the railway by using the big, blue cyclists' bridge in Cheshunt.  After this we followed one of the prettiest cycle routes in the valley, as we followed the River Lea to Fishers Green and our café at Hayes Hill Farm.

We stayed on NCR 1 over Clayton Hill to Lower Nazing, then up to Nazeing and into Harlow.  The difficulty now was to find a way onto the cycle routes in Harlow. Such was the effort of the designers to keep cyclists out of the way of cars, that they did their best to prevent any cyclist transferring from a main road onto the tracks.
After some difficulty we found our way onto a cycle track and followed this from Great Parndon to Little Parndon, then followed a road and another cycle path to The River Stort.  Now it was an easy and pleasant ride out of Harlow, through Gilston, High Wych and Sawbridgeworth to Hatfield Heath.

All day the sun had been shining and it was quite warm sitting on the green watching the cricket pitch being prepared for a match.

It was now an easy route through lanes to North Weald and then the main drag through Epping Forest, avoiding Ivy Chimneys and arriving at Upshire quite early.  Despite this the queue for cakes was impressive and so were the cakes.

Back home in the dry – perfect cycle touring.