The ride today was planned to go to Rye House near Hoddesdon, but events got in the way. Jon and Judy had coffee with us before returning home, so it was only Richard, Steve and I who set off to do the planned route of about 23.5 miles looping north-west first before skirting north of Welwyn Garden City to head for our destination in the Lea Valley. As there were only a few of us we took the opportunity to explore a bit and took a shortcut to Welwyn village through the new executive housing estate now called Wilshere Park, built on the site of the old stately home The Frythe. I knew this building when it was used as the research centre for the Smith, Kline and French pharmaceutical company before it eventually merged with Glaxo and moved the research centre to Harlow. The old house is now luxury apartments.

After Welwyn, we went through Oaklands, Bulls Green and Bramfield where I saw my first snowdrops of the year (I've been away if you were wondering......)
We climbed out of the Beane valley then went to Wadesmill via Crouch End, then into Ware where we used a useful cut-through route avoiding the town centre. Unfortunately Steve had a puncture then afterwards noticed the tyre wasn't seated correctly so had to refit the tyre. As we lost a lot of time we re-routed to Hertford, and guess where? The Six Templars, of course, where we had cheap quick food before heading back through Hatfield on the usual route along the Old Coach Road, just getting home before the rain started. I did 45 miles in total so I think the route from coffee was about 35 miles.

Posted by ShertsCTC at 10:30 No comments:

We gathered in the Waterend Barn for a welcome pre-ride coffee (full breakfast for some) on one of the coldest mornings for ages. There had been a sharp overnight frost after days or was it weeks of rain. We set off wondering what the roads would be like - flooded, icy or both? Caution was definitely required. We noticed ice in some of the roadside puddles, but the lanes themselves seemed OK.

We passed through Wheathampstead.  A long stretch of the next lane to Ayot St Lawrence was underwater, but could have been deeper, I suppose. Then along the shaded lane towards Kimpton, I was suddenly aware that the surface was black ice with a film of melted water on top. A clatter from behind said that three of our party had fallen off. Thank goodness there was no serious harm to riders or bikes. We walked the rest of the lane and pondered whether to continue or not. We decided to go on, but stick to well-used roads.
From Peters Green we took the route past Someries Castle then the cycle path through the fringes of Luton (recently identified as the UK's pollution capital). Managing to navigate through Stockwell Park we were soon in the very obliging and pleasant local - The Plough, Woodside. We'd seen flooding, ice and bright sun - all in a day's mid-winter cycling. After lunch it was a straightforward and incident free route back through Kinsbourne Green and Harpenden.

A fairly normal winter’s day, a bit drizzly early on and forecast to get drier later. There were just 6 of us at the start at Poppins cafe in Hatfield with an anticipated start time of 10.30. Unfortunately when I arrived Gary was already outside the cafe struggling with a puncture. To compound his problems he couldn’t get his pump to work and as he had Schrader (car type) valves none of our pumps would fit. He then tried taking the wheel to a nearby garage to inflate it but that didn’t work either. Unsurprisingly at this point he gave up saying he would get a lift home. As it was now later it gave me a good excuse to shorten my planned route to Great Offley.

Away we went to Ayot St. Peter where Jon and Judy, who had already cycled from Barnet turned back as they had planned.  Shortly after Jackie, who had come out for a short ride decided to turn off to her home in Knebworth. So now it was just Richard and myself, going on through Whitwell and then through the small country lanes to the “Red Lion” pub at Great Offley. This is a very popular pub and the landlord must be extremely pleased, as despite there being only two of us the place was so packed we couldn’t get in. 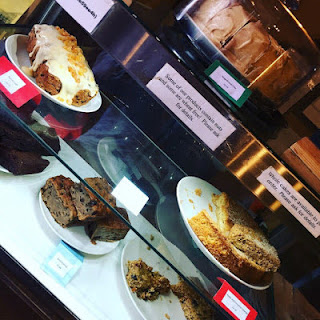 An alternative plan was hatched and we quickly got onto Lilley Bottom for a fast ride back to Whitwell and Emily’s, the cafe much frequented by cyclists, for a light lunch of beans on toast. From there it was an easy ride back to the start for me whilst Richard headed to St Albans. As to how far we travelled I have no idea as my new cycle computer decided to malfunction. However on a more positive note it was dry all day and not too cold and amazingly the wind seemed to be with us both on the way out and back which is a rare occurrence.

Posted by ShertsCTC at 10:30 No comments:

On a slightly misty Sunday morning 14 cyclists headed out from the Waterend Barn. Two of us headed back home as they had already done 16 miles to meet us in Waterend Barn. The others set out north. Keeping an eye on 12 cyclists had its challenges, but once we were on the small country lanes this got easier. I chose a hilly start, going along Waterend Lane to Ayot Little Green. From there on it was a bit flatter, at least until we crossed the River Mimram at Kimpton Mill. Another hill had to be climbed before getting into Preston.

The road from Preston to Great Offley was new to me, and I found it quite enjoyable. Along this part we met quite a few other cyclists. Part of the joy might have also been connected to the weather, as here the roads had stayed dry. The drizzle varied a bit throughout the day. Here it was completely dry, but at other times the drizzle turned to rain and most of the time the roads were wet. This transformed the backs of our riders without mudguards into works of art. 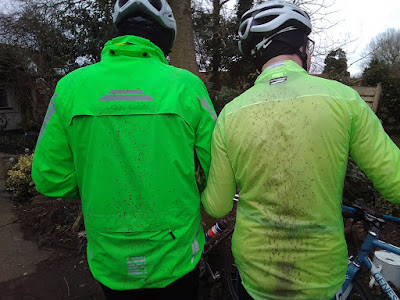 The downhill bit from Great Offley to Lilley was slightly more difficult than expected. Not only were we hungry, but also a westerly wind was causing extra head wind. The Lilley Arms provided enough seating for our big group and after a lengthy ordering process we quickly got our food. 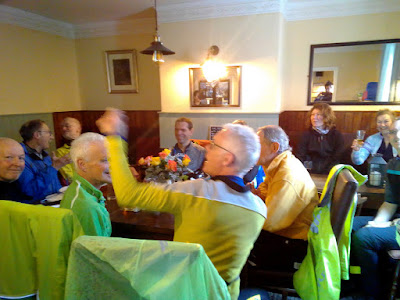 We left the pub at quarter to two, to reach St Albans before the dusk. Our group split into two shortly after lunch, one half wanted to take the expected less hilly way along Lilley Bottom, while the other half followed me passing by the east side of Luton airport. Checking my route-planning website, the latter group might have saved a few metres of ascent. I quite enjoyed the less usual route along the ridges and the view over Lilley Bottom. A few hills were unavoidable, with the longest one after crossing the River Lea going up Leasey Bridge Lane. Around there I got a slow puncture, but gratefully with just two extra pumping ups we managed to continue back to St Albans, where we arrived 15:30, well before sunset.