Through the swirling mist on a cold morning six riders gathered in the welcome warmth of the Waterend Barn. Coffee, and for some, breakfast was consumed in preparation for the twenty-mile jaunt to Hatfield. Taking a roundabout route to get to the King William on Sandridge Road, Carol complained about a noise emanating from her front wheel, After stopping for inspection & removing her front wheel, her disc-brake pads promptly fell out. Taking this as a bad omen, she decided to return the half-mile home to take the bus to Hatfield.  We continued through Sandridge, across Nomansland and down Leasey Bridge Lane and through Marshalls Heath with the sky brightening. I had intended to go via Peters Green, but after a descent to the Lower Luton Road & looking at my watch I aborted this plan & headed for Kimpton to take the shortest route from there to Hatfield.  Promptly at mid-day the rain started; it was light at first & I made the mistake of not donning my waterproof shorts. The rain slowly but steadily intensified, so by the time we had traversed along Kimpton Bottom, up to Ayot Green and down to Lemsford & Hatfield Garden Village to Hatfield we were all rather wet. John E arrived at the same time as us (1 p.m.) having cycled straight to the pub.
All the others, including Jon and Judy who had ridden from Barnet were already sitting in warmth and dry at a table for twelve in Harpsfield Hall where we all enjoyed a Christmas Lunch, one of us having the traditional dish of vegetable curry. Jon presented Carol with "The Jon Crosby trophy for best South Herts ride leader".


Steve
Posted by ShertsCTC at 08:15 No comments:

This was our first winter ride of the season, with a later start time and a single stop at lunch.  Fortunately the weather was mild and, despite some light rain on the way to the start, dry.

We welcomed two new riders: Richard from Harpenden, who had recently given up commuting for a local job; and fellow EU citizen Ronny, an astrophysicist from Germany currently living in St Albans.  Ronny told us he had come here for love and work, so let’s hope the funding for science does not disappear in the next few years. 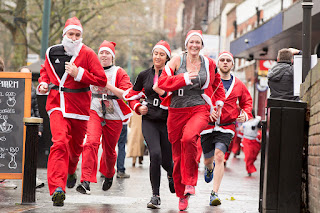 There were a lot of charity Santa runners around the pub forecourt for the Jingle Bell Jog, so I took a slightly circuitous route to the Market Street and then headed out towards Redbourn before using Hogg End Lane to skirt around the edge of Hemel.  There was a lot of motor traffic in the narrow lanes near Hemel, perhaps a consequence of our later start.  The wider route along Gaddesden Row was welcome, as the cars had room to overtake.

After Gaddesden Row, we cut cross country, up and down a couple of hills to hit the outskirts of Dunstable.  A back seat driver interfered at one stage, but then admitted my route was correct.  From Dunstable, a short stretch of the A5 took us to the turning for Caddington.

Carol had checked with the Chequers at Caddington, that they would be able to serve us sandwiches, and they had said there was no problem.  Once we were there, the pub decided they had too many bookings for lunch to cope with us.  Fortunately we had reached the pub in good time and a quick phone call by Carol to the Plough at Woodside, confirmed they would welcome us.

After lunch, we took a reasonably direct lanes route back through Slip End and Annables Lane to Harpenden and from there over Nomansland Common.  Richard left the group at Harpenden to put in a fast circuit before he got home.
Judy 03/12/2017
Posted by ShertsCTC at 10:30 No comments: