We welcomed new (to us) rider Steve R of St Albans 40+ fame, who usually goes mountain biking on a Sunday, and also Peter H returning after a long absence.to improve his fitness. Steve B certainly did that by finding an across the grain route around our side of The Chilterns. 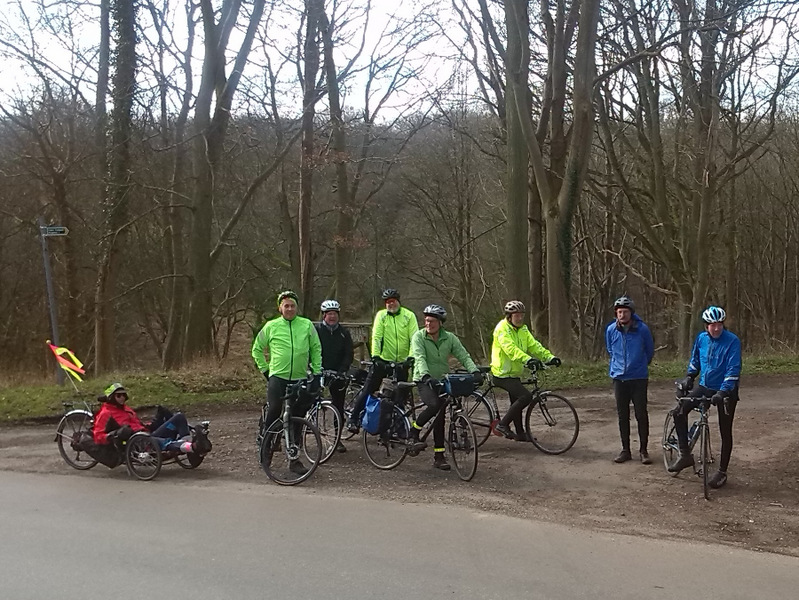 Posted by ShertsCTC at 07:18 No comments:

Seven of us assembled at Hatfield for a ride to a new pub Carol had found on the edge of Stevenage.  Our elevenses stop was the golf club at Whitehill and I told the group that I had plotted a longish route there, so it would be a late elevenses.

There were no objections so I set off on a route looping south through Wildhill and Little Berkhamsted (pictured), before crossing the A414 and heading through Bramfield and Waterford to Sacombe Road.  At the end of Sacombe Road, the rest of the group decided to follow Carol on the scenic (and flat) route through Sacombe Estate while I took the long way round to avoid the loose gravel.

We all met up at the golf club and, over our elevenses, signed the petition seeking a poll of the whole membership about the decision to rebrand.  While it might be necessary to change the focus of the club now we were a charity, all agreed that CTC HQ had handled the move very badly by not telling members what was going on until it leaked out in social media; HQ should have tried to explain the situation to members and gain their support – or failing that their understanding.
After leaving the golf club we met a group of four horse riders at Dane End.  I'd met them before on the way up the hill and frightened one of the horses, so I paused to let them pass.  It was then a pleasant and gentle ride through the lanes through Haultwick and Ardeley down to the B road near Cromer where we found ourselves cycling into the strong SSW winds until we reached Aston.  From here I had researched the cycle routes of Stevenage and found a direct route to the pub.  This worked well and we arrived at the rather crowded pub at 13.00.

Our return journey followed cycle paths on the edge of Stevenage to Bragbury End.  From there, most of the group made their way back south to Hatfield.

Posted by ShertsCTC at 07:24 No comments:

Nine of us met at the war memorial; it was quite a crisp morning. I was aware that we had a bit of a stretch to get to break, so my route was straightforward and fairly linear, but no sooner had we set of than our first casualty of the day struck. Carol had a dodgy knee and didn’t want to risk making it worse, so she bowed out of the day’s events. 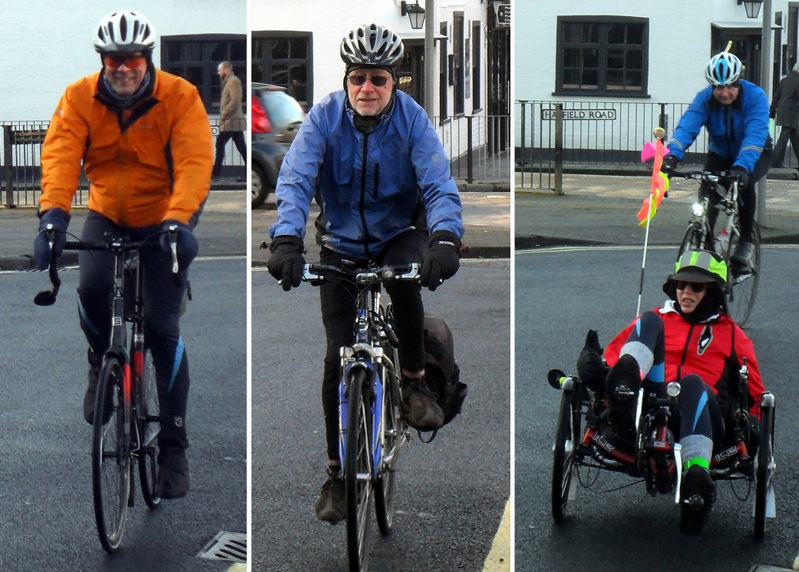 My route took us down to Nash Mills, up Rucklers Lane, over to Flaunden and on to Latimer Bottom. Here I shocked everyone by taking them up Stoney Hill; this is quite a steep ascent with a lovely bend hiding the top. At Chalfont St Giles it was just a couple of miles to Chalfont St Peter, which I nearly missed, but thanks to eagle eyed Jon we made the café only a little late and we had covered a good 20 miles. I was now quite confident of the rest of the journey. 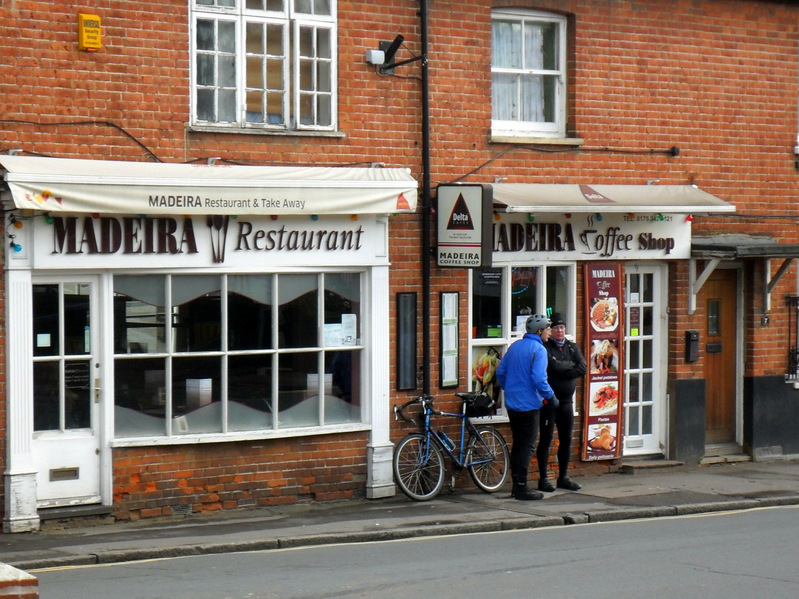 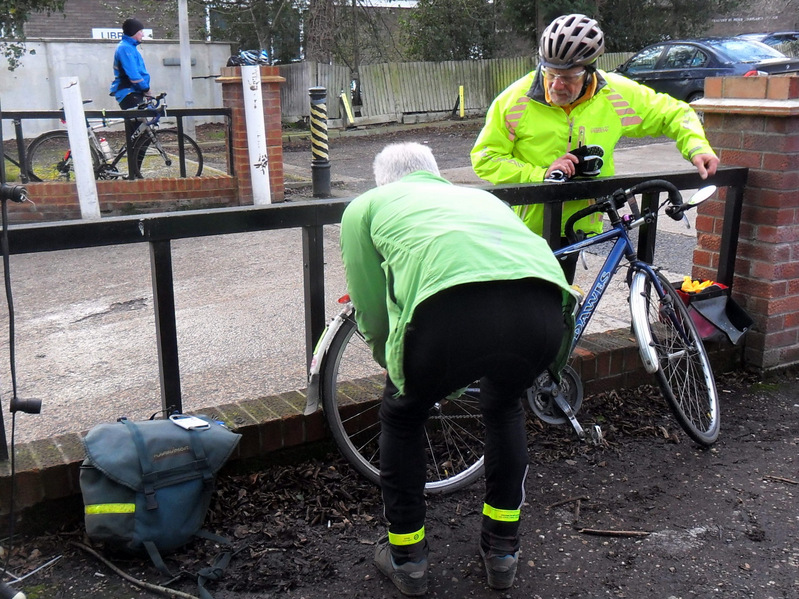 As we left after break it transpired that Steve’s gear cable had snapped. Valiant efforts at repair were thwarted when we saw all his gear changing had worn through the outer, leaving him with just the front gears, so Steve was our next casualty. I was full of confidence as we left Chalfont St Peter and the roads were turning out as I imagined them from the map, but I hadn’t done a test ride of this route so all was new to me. And with no further ado the whole group was the next victim, as I confidently took the wrong right hand turn we zipped past the air museum, as I had planned, but strangely on the wrong side of it.  Carried away by the lovely winding decent, which I was expecting it to curve up but it never did, we ended up in Maple Cross and a long way off-route (Doh!).

But never fear, our bikes had miraculous beer divining capabilities and led us under the M25 and up a slight hill to a Land Of Liberty, Peace & Plenty. This is a rather quaint little pub with excellent beer from all corners of this isle, though there were only very limited snacks and a 45-minute wait for microwaved pasties. Their sausage rolls were quite tasty, but the pub’s main drawback was the lack of interest in serving up anything more substantial.


After a brief lunch and quick discussion we decided that the route home was going to be via Rickmansworth, the Ebury way, Watford, Bricket Wood and St Peters Street.
A good fun day out that in the end involved everybody in decision-making, a real team effort.

Posted by ShertsCTC at 06:22 No comments:

It was Captain Carol versus Storm Imogen, the ninth storm to hit Britain this season. As Potters Bar was too close for a direct route and to show who’s boss, we headed west to go east and soon found ourselves battling a head wind on The Alban Way, a beautifully smooth tarmac route out of Hatfield.  Approaching St Albans, Imogen had seen us coming and thrown a tree right across the path. 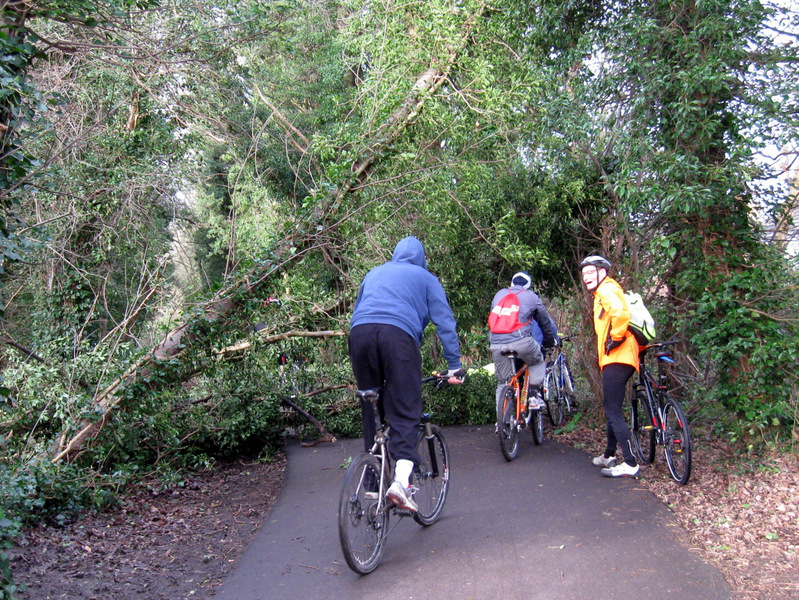 Annoyed that we had squeezed past, she launched a cold shower at us as Carol wiggled through the back streets and onto the climb to Shenley.  Cascades of water were flowing down Mimms Lane, stirring up the gravel and soon Carol was victim to a flat tyre.  Neil had dropped back, thinking his leg muscles had suddenly disintegrated, but Steve’s detective work soon discovered his chain was jamming in the guide pulley: maybe the bike shop hadn’t shortened the new chain they had just fitted for him? 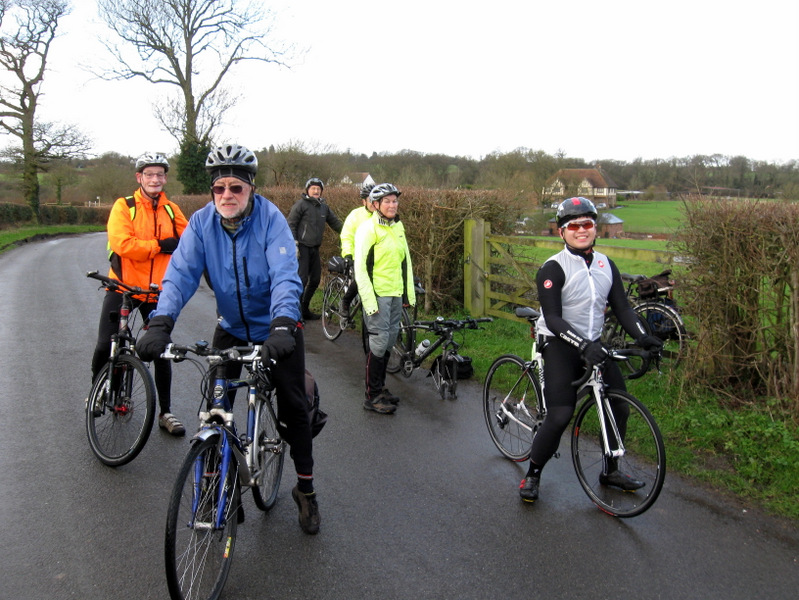 We reached Wetherspoons in Potters Bar just before 11, where Edward, our hungry 21-year-old student, wasted no time in demolishing a Big Breakfast.  Carol reckoned that needed burning off, so she took us up and down every hill she could find in the 13 miles to Hoddesdon. Our only rest was in Newgate Street, where Richard made his lack of presence felt. He was found pushing his bike up Carbone Hill, claiming another mechanical problem and he wasn’t kidding.  His rear mech had broken apart on the hill. We patched it up with that essential component of any toolkit, a trusty zip tie, so he could just about ride it home.

Our mechanical problems weren’t quite over.  Arriving at the pub Carol had a squishy back tyre and her mechanic was called into action.  Intent on using a sink in the pub toilets to find the hole in the tube, he somehow managed to get the valve to come apart and spent a nervous few minutes scrabbling about on the toilet floor looking for it.  Discretion being the better part of valour, he gave up fearing imminent arrest.  After a warming meal and a natter in the pub, he was last seen swapping tubes between bikes. While most headed straight back up-wind to Hatfield, I took a more leisurely route through Lea Valley Park, photographing some of the sculptures along the way.