It was a blustery day when five people gathered outside Asda in Hatfield for the 9am start to Baldock. Christine joined us for the first time on a Sunday ride and had no problems keeping up even though her  bike did not have low gears. After leaving urban areas we cycled along quiet lanes via Ayot Green, Codicote and west of Stevenage making good time as we covered the 22 miles to arrive at Cafe Plus in Baldock by 10.50. Peter joined just as we were leaving and as we crossed the Baldock bypass heading east we realised how strong the now headwind actually was. It was really hard crossing all the open fields with no trees or hedges to keep the wind away. We stopped for the obligatory viewing of the George Orwell plaque in Wallington before continuing east through the very pretty North Hertfordshire villages to reach our lunch stop in Great Hormead. 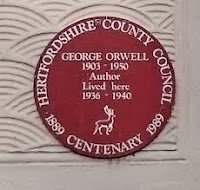 On the way down into the village we spotted a war memorial dedicated to a USAAF pilot who died in WW2 in 1944. More information here. 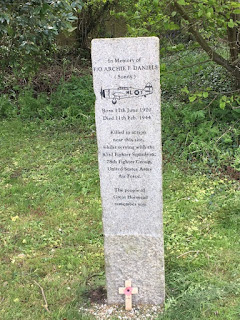 The Three Tuns was a great lunch stop with good quality and well priced sandwiches and as it wasn't warm enough too sit outside we were pleased to find an almost-private dining room indoors.

After lunch Peter returned to Baldock and the rest of us took a direct route to Hertord via Sacombe Green where we had a quick tea or coffee in Rose cafe followed by the usual Hertingfordbury and edge of WGC route back to the start. We did about 74 miles round trip on a very windy day but it didn't rain.
.

St George's Day turned out to have a reasonable weather forecast and eight people gathered around the war memorial outside the Blacksmiths Arms in St Albans. Steve had a bulging tyre so the departure was delayed for ten minutes while he refitted it. As the morning cafe stop was 22 miles away we took a fairly direct route via Hogg End Lane to the edge of Hemel, then down the old small road that is now a cycle path to Piccott's End. We merged into a throng of cyclists doing the Hemel Hillbuster ride and followed their route to Little Gaddesden where they peeled off to go down to Hudnall and we carried on to Ivinghoe Beacon. This was a great route today as the bluebells were at their prime.
In Ivinghoe village several Verulam cyclists went by and fortunately told us they were heading for Pitstone cafe rather than Jackie's cafe between Cheddington and Marsworth. At the cafe Steve and I opted for the scrumptious looking bread and butter pudding which tasted as good as it looked at the very reasonable price of £1.50 per portion.
After the 11s stop only Sue, Steve and I carried on to Winslow via an undulating route west of Leighton Buzzard to the excellent Bell Hotel where Steve H joined us for lunch (by car due to a dodgy knee). The others  had decided to go back from coffee as they had things to do.

After lunch we headed to Wilstone for a tea stop via a route that took in Cublington Hill where Sue and I got a few cheers as  it was the end point of a Ladies' cycle race and we were 20 minutes ahead of the pack! Wilstone farm cafe was a good place to stop after 20 or so miles and Steve who is an ex-tractor fan enjoyed sitting on the old Massey Ferguson.

We covered about 70 miles on this route

As we met at Hatfield for this week’s Sunday ride, the weather forecast was predicting rain and some had come prepared for that. The route I had planned was quick and easy in an attempt to beat the rain. We shot off through Welham Green and over to Bell Bar, then headed down the very familiar route of Tylers Causeway - White Stubbs lane. Going through the wooded areas was lovely and we had quite a wind behind us. I spied quite a few of those mauve blue bell things making the scenery look very nice indeed.
We took a small detour around to Wormley Westend. We hadn’t been down this road since the pub had changed hands and become a restaurant; it made for a nice change. Soon we were heading through Nazeing and seeking out the towpath that led us to Dobb’s Weir and tea break. It has to be said that this café has found its place; the service was quick and efficient.

After tea several members had to turn back to attend family duties, while the rest of us pushed on forward. Through Roydon Hamlet, Broadly Common, Parndon Wood and out towards Hastingwood, remarkably the wind had kept up with us, but the rain was nowhere to be seen. Going along Essex roads is quite fun as nothing is straight, almost as if they were made by drunken Romans, and we made our wiggly way to High Laver then on to Matching Green, eventually reaching Matching Tye.

The Fox was unexpectedly quiet. Being a bank holiday, I thought this place would be rammed, but no, we had plenty of space and had a rather leisurely lunch.

The way back consisted of going through Sheering and then over the M11, where we took a crafty right-handed turn to go into Lower Sheering. This road brought a new meaning to posh; I could’ve sworn someone was hoovering the hedgerow. We passed a certain pop star’s house and took note of his 5-a-side footie pitch complete with dugouts.

Once we had passed these delights we headed to Sawbridgeworth and then on to Allens Green. The next part was quite a familiar hack back towards Ware. At Widford we decided to go via Little Amwell - I do like the water feature there. As we came through little Amwell, Carol copped a puncture and very luckily found the culprit straight away. Then it started to rain; we decided to decamp to Ware and have a break in Esem’s and as we did the rain sort of petered out. We took to the river path to get to Hertford and then it was a copy of the home leg from Saturday and we were back in Hatfield. A good day’s cycling.

We had a nice little turnout for our trip into Hertford. We welcomed back Sybil and said hello to new rider Jane and it was great to see Jon out after his op. Before we set off though, I was very impressed by the motorized bicycle that was chained up at the bike stands. It looked very much like an early Harley, but it was just an industrious human mind at work (see pic).

The route was very straightforward. We took in Welwyn Garden City, Panshanger, Tewin and Bramfield on our way to Hertford. As we passed through the woods that lay between Tewin and Bramfield where we were treated to a lovely display of bluebells, which seemed to carpet the whole area.  This is an ancient wood and on inspection they turned out to be English bluebells.

The weather was extremely pleasant, and seemed to be the best of the weekend, as we made our happy way into Hertford and arrived at a packed Rose Café. This place never ceases to amaze me and is always busy, always quick and very polite. We had to take over the seats outside, but having said that it was great to sit in the sunshine and a little quieter than inside.

After our break we made our journey back to Hatfield via the Lower Essendon Road, where we said good-bye to Jon and Judy. We turned off to Hertingfordbury and up along the old A414, which goes through Birch Green, Stains Green and Letty Green.

We took in the last part of the Cole Green way, WGC and back into Hatfield. It was a really nice Saturday morning’s ride and I hope that everyone can join me for the next ride in a months’ time, where we will venture down the Alban Way and explore the Ayot Greenway.

A beautiful day forecast and 6 of us at the start in Hertford. This included Enrico a new rider with us who had been with N. Herts CTC. First stop was Bishops Stortford so off we went via Ware and back lanes through Perry Green etc.

At this point I went slightly wrong and we ended up approaching B.S. from the south rather than from the west. However this gave us the opportunity to cycle right through the southern outskirts of the town and up the pedestrianised main shopping street so it was actually quite interesting. Then from the old centre of town we turned into Bridge Street, where the cafe is situated. This is another cafe operated by east Europeans and we remarked how efficient and good value these cafes always seem to be.

Just as we were about to leave, Enrico found he had a puncture. And in another example of amazing efficiency he dealt with it very quickly. Then northwards out of B.S. past an enormous new housing estate being built on the outskirts which, from a plane roaring overhead, seemed to be directly under the flight path of nearby Stansted, a nice feature for the potential new homeowners. Then out into unspoiled countryside in glorious sunshine through Maggots End (interesting English place name) towards Buntingford. From there a short distance to Aspenden, a very pretty village, with a pretty pub – ‘The Fox’. Here at our lunch stop Adrian and Richard joined us. After a pleasant meal sitting outside we headed southwest towards Codicote the designated tea stop.

However at Datchworth, following discussions, it was agreed we would split the party. Some would go on in the direction of Codicote but others would head towards Welwyn/Hatfield or the start at Hertford. This latter group ended up in ‘The Plume of Feathers’ pub as the only place open for tea. We were staggered to find the pub garden packed with tables and people still eating lunches etc. Then back to Hertford with a total mileage of about 50 all in the most glorious spring weather.
peteR

Posted by ShertsCTC at 09:04 No comments:

It was a bright and sunny Sunday morning, only marred by a chilly and strong northerly wind. Pity really as our route was due north. Our first destination was Leighton Buzzard Garden Centre - quite a long way out so a fairly direct route for a bit until we had put some distance in.

It wasn't long before the strong head wind was sapping some of our natural vigour, but new rider Bou was having no trouble on his sparkly new light-weight machine. We skirted Studham and then Dagnall and Eaton Bray, then through picturesque Eggington to arrive in the garden centre cafe. Here Bou wanted to go directly home, as he wasn't used to doing longer distances. We persuaded him this was a bad idea as he was bound to get lost and really the onward journey was a sort of short cut. But we did take a shorter route to lunch at Upper Sundon, so called because it’s at the top of a extremely long and steep hill.

After lunch by the pond and a drink in the Red Lion, the planned homeward route lay along Lilly Bottom with a stop at the regularly used Emily's. But instead we decided to take the cycle path through the centre of Luton with a very pleasant tea at the excellent cafe in Wheathampstead. Thanks for your company Bou and hope to see you again soon.