Today’s ride was a pleasant, hilly affair and the whole point of this particular ride is to get people used to long, gradually ascending climbs. We took an easy route out of St Albans via the park and then made our way over to Rucklers Lane via Bedmond. Just as we were beginning the climb up to Chipperfield one of our number spotted her husband cycling past us (he didn’t spot his spouse though). Rucklers was unusually busy and we had to pull over a couple of times. After the climb we were rewarded with tea and cakes at the garden centre.

When we emerged from the café we could feel the heat had risen quite a bit, so I decided to miss out on going into Chipperfield and opted for going back the way we came and go to King’s Langley via Barnes Lane. Once in Kings Langley we made quick work of the busy area and were soon huffing and puffing up the delights of Tom’s Lane.

It was a very hot but pleasant morning’s ride, looking forward to the next one ☺

Our Sunday ride started in Wheathampstead from where we headed north into the Chiltern Hills. This meant a few climbs but also some downhill through a tranquil countryside along small roads.

The crops started to turn yellow, together with blue skies, green woods in the distance, and colourful meadows it felt like a good summer day (just shortly after the summer solstice). Once we reached the top of Hexton Hill we could enjoy how the hard worked for potential energy was transformed into forward speed down towards Stondon. There we had breakfast, after which Alistair and Phil went back home but therefore we were joined by Adrian and Jeff.

Going along the Scenic Route we went around Southill Park and climbed up Haynes Church End. From there it was another descent into Clophill, where we had lunch at "The Dog & Badger". Enjoying our drinks and food in the garden we were still able to count the vast amount of goals shot by the English team before the half time.

On our way home we enjoyed the empty roads while the game was continuing (although the short bit along the A6 was still busy with cars). Another big hill needed to be climbed when leaving Barton-le-Clay. After the Hill Jeff and Adrian went back, and Jackie, Steve, Richard, and Ronny descended the dry Mimram river valley to Whitwell, where we stopped for tea at Emily's Cafe, before attacking the final hills on the way home.

It was a rainy start to Sunday morning, but that didn't put off our group of riders as we set off from Hertford along the track overlooking the Lea valley and passing the ancient St Leonard's Church. From Ware we briefly followed the old A10 to Cold Christmas Lane, then down to Much Hadham.

Last time we came here the roads were running with water after torrential rain. But no problems this time and it was into the Bridge Cafe, Bishop's Stortford for a breather.

Taking the road north out of the town. passing the new large scale housing developments, we soon got to Manuden. Branching off down the quiet and charming lane to Rickling, we paused by the church. The route ahead by road was clear enough, but there was also a track. It was a short cut; it looked well surfaced; we didn't know it, but why not give it a try? It started well, but gradually got more rutted and stoney and walking was necessary.

This track (a byway) between Rickling and Newport is definitely not cyclable, but eventually we came out the other end, though not before some hurtful comments had been made about the leader's abilities. After Newport we were soon at the Wetherspoon's pub in Saffron Walden.


After lunch we left the town passing Audley End and crossing the River Cam to head into rolling open hills round Chrishall. This was a treat, but hilly, and we were relieved to get to Braughing Church Hall and it's renowned Sunday afternoon teas.


From here we split up to head for home.

We could have named this ride "The crossing of the motorways" How many times did we pass over or under a motorway? Answer at the end of the blog.

It was the day of the St Albans half-marathon so we left the city using Ragged Hall Lane to avoid the crowds in Verulamium Park. We passed many yellow-clad route marshalls along the way to Bedmond and thought their main job would be clearing the discarded plastic water-bottles after the race. A fairly direct route through Hunton Bridge and Chorleywood took us under the Metropolitan Line and then we wiggled through the back of Mill End to pick up a signed cycle route to Maple Cross and Duran's cafe, where we met Paul who hadn't been out for a couple of years.  After coffee we had to follow a diversion as Chalfont Lane was closed completely. When we crossed the M25 we could see massive road works and what appeared to be a new junction being built. It turns out the road is closed for eight years as part of the HS2 project.


After this delay we explored a bridleway short-cut between south of Chalfont St Peter and Gerrards Cross. It started out well along a proper road and across a field, then we had to get directions from a local resident and go along a very narrow overgrown section until we crossed the River Misbourne.


After crossing the A413 we skirted Gerrards Cross and headed south through Fulmer then across to Egypt before a glorious ride along the Lord Mayor's Avenue in Burnham Beeches. Unfortunately when we got to the intended pub they said they had stopped serving food on Sundays so we back-tracked to the nearby Blackwood Arms where we had some very expensive "deconstructed" cheese sandwiches, which were single-slice doorsteps of bread with some cheese and tomato draped over the top.

After lunch we went via Beaconsfield, Seer Green and the Chalfonts before heading to Sarratt Church for a tea stop, as we had noticed some signs in the morning about a flower festival to be held on 10th June. So for the second week running we had a church tea, this time accompanied by beautiful flower displays.

A short ride took us back to St Albans and we only covered about 63 miles - it seemed much further when you get south of the M40!

I counted nine motorway crossings during the day.

Posted by ShertsCTC at 08:23 No comments:

The forecast was for a hot and sunny day and five people were gathered at the start in Hatfield. The Roydon cafe Peter was heading for is a fair distance so we went along a direct route via Welham Green, Woodside and Broxbourne Woods before passing through Hoddesdon and Rye House.  On a summer morning, even the rather boring White Stubbs Lane was a joy to pedal along , as the trees gave lots of shade keeping the air cool.

We met new rider Mary at the cafe, and were pleased to see Jon there too. It's a great place on a sunny day, with good views over the marina and basic, but good-value food.
After the coffee stop we went along the fairly busy road towards Waltham Abbey, before taking the quiet route along the southern edge of Harlow, prior to getting into the pretty Essex countryside with its tiny lanes and plenty of thatch and pargeting to be seen. A particularly fine, newly thatched roof was seen en-route.

Although the Moletrap pub was very busy, we managed to get an outside table in the shade and, after prompt delivery of the sausage sandwiches and the smelly arrival of some antique motorbikes with similarly aged riders, we were on our way again by 2pm. Lunch discussion was about Brooks leather saddles, as Ronny had had his stolen so had just bought a new one. I tried to get a link to a recent Cycling Plus article which said they make 4500 saddles each week, but couldn't get one so here is a link instead to read about Brooks saddle history and heritage 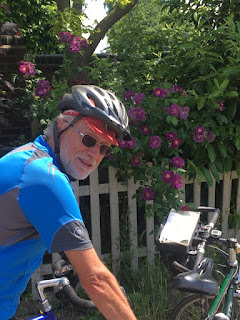 After passing some beautiful roses, we made our way to Upshire church where the cake display was as good as it gets. After the tea stop we went into the Lea Valley park and left via Wharf Road, to nearly retrace our outward route via Wormley West End back towards Hatfield. Mary left us to go up the towpath back to Broxbourne.

Posted by ShertsCTC at 09:21 No comments: