It was raining hard when I set out and having seen the forecast that was no surprise.  It was due to last all day, so it was a case of cape and overshoes then head down into the wind and rain for the 10 miles to Hatfield.  I knew our leader, Tracey would be there having phoned to check.  Sure enough, she was taking her ride leading duties seriously knowing that we rarely cancel a ride except in dangerously icy conditions.  The radar image shows it was our turn to cop the bad weather: 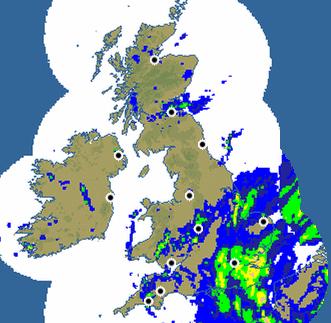 Neil joined us to make it three and after some debate on the best route, Tracey led us south of Welwyn Garden City onto a short stretch of the Cole Green Way.  This runs all the way through to Hertford, but we decided to leave it at Cole Green and take the back road to Hertingfordbury. 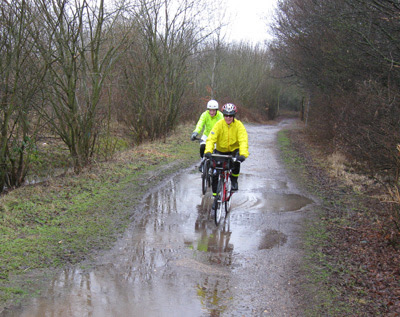 On joining the B158 we were just pulling round a flooded stretch of road when a racing cyclist came by shouting a warning to keep out of his way.  He shot past at twice our speed on a carbon disc wheeled bike and dressed in a Lycra skin suit.  We climbed the hill up to Bayford and came across a few more of these intrepid racers, feeling quite glad we were allowed to wear waterproofs in the heavy rain and a temperature of 5 degrees centigrade. 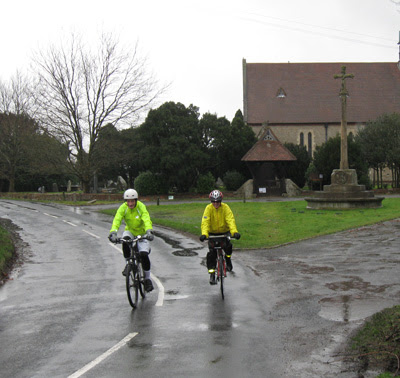 We were glad to reach Hoddesdon Sainsburys, but a little concerned when we looked through the windows and couldn't see the cafe.  Our mood changed when we found the cafe had been moved and refurbished as a more up-market venue with comfy chairs; however anyone wanting a cooked breakfast was out of luck as the menu was more cappuccino and cake rather than mug of tea and fry up.  Richard joined us there and we all dried out a lot, hoping they didn't mind us leaving damp patches all over the floor.  No one was in the mood for carrying on to Green Tye as there was no let up with the rain, so we all headed back through Broxbourne woods and passed Paradise Wildlife Park.  We headed up the lane by the lion enclosure, but it was obviously too wet for the lion we often see on the raised platform. 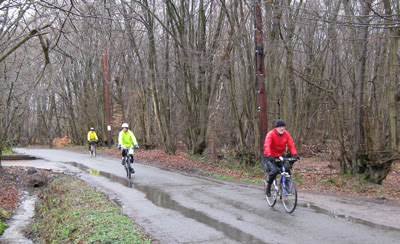 Despite the weather we were enjoying the route on the quiet lanes Tracey had chosen.  We all carried on to Epping Green, where Tracey and Neil headed for home going north, while Richard and I headed south for home and hot baths.
Route: