We decided we'd like to try and catch some late sun in Portugal, which would help the country overcome its debt mountain, and for the first time ever we risked hiring bicycles to use on our tour. I had found a company called Cycling Rentals who would deliver and collect two 'suspension touring bikes’ to our base hotel in Faro town. The bikes looked suitable from the website pictures and were equipped with proper racks for panniers.

We flew into Faro on a Thursday lunchtime flight from Gatwick to a wonderful 28ºC of sunshine. A 1.8€ bus ride took us to within walking distance of our hotel just outside of the old-town part of Faro. The bikes had been delivered the previous day so we just needed to turn the handlebars and put our pedals on. Steve changed his saddle, but I thought the saddle on the bike looked OK and ended up not bothering to change it to the Terry one I'd brought with me.

The only snag was that I'd been a bit mean by not paying 12€ to hire an Ortlieb bar bag and mount for my bike. I'd brought a basket and mounting bracket with me, but it would not fit on the oversized handlebar. I was resigned to using zip ties to fix the basket to the top of the rear rack in order to provide a way of carrying the stuff I'd normally put in a bar bag.

We had booked two nights at the Hotel Alnacir at the beginning of the holiday and one night at the end.  This would give us a day ride to test the bikes and also allow us to leave some stuff at the hotel in the bike boxes.
The plan was to cycle to Tavira and back via Estoi. In fact, we spent most of the morning visiting bike shops to try to find a cheap bar bag or basket for me. We struck lucky at a shop which had a lightweight basket with a big mount that fitted the large-diameter handlebars. So I have come back to the UK with two baskets now.
We pedalled inland to Estoi up a gentle incline to just miss the Roman ruins as the attendant said there was not enough time to visit properly before lunch. With our cultural itinerary stymied, we instead visited the nearby Pousada hotel in a converted palace and on entry, were seduced by its opulence and surrendered to the siren call of gluttony by having a lunch on a beautiful terrace with a superb view over the gardens.

After lunch, we followed country roads through citrus groves & wild pomegranate trees to the coastal town of Tavira, which deserved more time than we could spend there. It was 5pm when we left and tried to follow an official cycle route called ‘Ecovia de litoral’ which was supposed to follow the coast back to Faro. However, we lost it after only a few km and as dusk was looming we cycled back along the N124 road. Which was not so bad as there was a hard shoulder to ride on most of the way. We covered 80k that day & the bikes with their (lockable) suspension forks were appreciated for cobbled roads in some of the towns.

Panniers packed, we left Faro to travel to Alte via Loule and Querenca. It was very hot again and uphill all the way. Loule was an old town but a bit spoiled on a Saturday by hordes of coach trippers who visit the market there. We carried on upwards on quite steep roads (by European standards) to visit a hilltop village of Querenca. A new road had been built up a slope that looked an intimidating 30%, so we carried on round the hill to find the original road, which was probably only 15% in places. The gears were not as low as on my regular bike but I just managed to stay pedalling.   Up and over more hills and eventually to our hotel described as 'above' the town of Alte - in fact 1km up yet another hill making a 60k total.

Cooler today at about 26ºC and strong winds in the middle of the day but largely down hill to sea level again. Followed the N124 (not busy) to Silves then around the lake to Porto de Lagos. Saw a good example of an old tiled advertisement for ‘Schweppes’. Followed a road on map that turned into a track, then managed to get over the motorway to the outskirts of Portimao. We ended up having our picnic outside a block of flats, as we couldn't find anything better. We were caught up in urban traffic and called in at Decathlon before deciding to just use the hard shoulder of the N-road to get to Lagos. There were too many railway lines and estuaries to cross to find a different route.  Later in the week, we worked out a better route for the return journey. 74 km today

Hotel Riomar was well situated in the old town with a balcony above the street. This had its downside when I realised there was a karaoke bar nearby and I heard 'YMCA' many times until 3am!!

Day 5: Monday - Day trip to Monchique and back 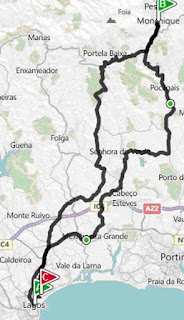 Hot again. I'd originally tried to plan a route that would have had an overnight stay in Monchique - a pretty town up in the Sierra de Monchique hills. I'm glad I couldn’t get the route planned as we climbed 460m over 48K and it took us three hours to get up there with no luggage. Very quiet route up with no cafe open until Casais. We bought a lunch today in a locals’ restaurant with an outside terrace overlooking gardens and the town swimming pool. We met an eccentric ex-pat woman gardener from Brighton. The pricing was weird in the restaurant 2.5€ for a half-litre of red wine, but 0.7€ for a butter pat!
We returned by a different route and researched our route for the next day to avoid the urban sprawl on the coast.  Lovely downhill to make it 84k for the day.

24ºC and no wind today. Short day back to Slives was only 40k. Visited Roman ruins en route, then followed a road that we thought looked like a track but was really wide tarmac to join the main road. Bought picnic lunch in the Continente supermarket then checked into our hotel. Picnic on balcony with a view over castle, then a wander round the town. Hotel meal was good value - soup, pork chops or fish, ice cream, espresso and a bottle of wine for 15€ each, on the terrace with castle view.

Easy riding to Alcantarilha where we visited a chapel built with human bones. Followed the Ecovia de Litoral from Alcantarilha to Albuferia and along the coast to Val de Lobo and Quinta do Lago. Down on the coast, Albuferia and Vilamoura were rather built up and not very nice. We followed the cycle route along the coast then got lost up a track when the signs disappeared and needed to use loads of MBs of mobile data to find our way to a road. 74k and about 26ºC today. Back at the hotel, we packed the bikes up into their boxes ready for a courier to collect.   We recommend the hire company and will try and use them again for touring Spain or Portugal.
Posted by ShertsCTC at 07:35