For the last couple of years our group tours have been into East Anglia.  This year, for a change, we headed west to the Cotswolds.  We were a mixed group of 11 CTC and Forty Plus members.  Setting out from St Albans on Sunday morning, we also had the company of the regular Sunday South Herts CTC group who were due to turn back after lunch and just make a day of it.  We were planning a four-day tour with three nights away, and trying to do it reasonably economically, so it would be Travelodges and YHA for us. 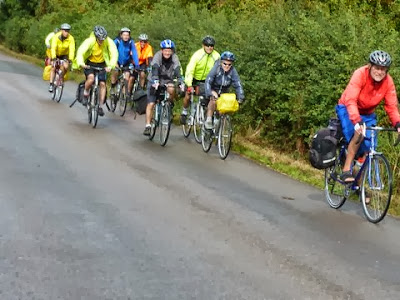 There was a mob of 24 of us when we got our first stop on Wendover Woods, with various people leaving and others joining up in a baffling fashion.  Continuing past the RAF base at Halton, we crossed the River Thame, then through the Rothschild estates to Waddesdon and on to the attractive village of Quainton.  The ever friendly George and Dragon had sandwiches ready and waiting.  After a relaxing lunch, the day-trippers headed back, and soon we were off on a loop around the villages towards Bicester.  The afternoon was wearing on so time to seek a quick refreshment in the town.  Bicester turned out to have a pleasant old heart beating once you got past the ring road and fringe of industrial estates.  It wasn’t that far from here to our Travelodge night’s stop, so picking a quieter but longer road it wasn’t long before we sighted the Travelodge – miles from anywhere and on a motorway junction.  Sighted it, yes, through the surrounding hedge, but no sign of a way in from the bridleway we were on.  Maybe the normal way in isn’t supposed to be by pushing your way through the bushes as we did.  The Travelodge was OK standard fare.  An evening walk to the nearby village of Ardley provided an excellent value meal at the Fox and Hounds.

The weather forecast had been a bit iffy, and it was raining heavily at breakfast with no sign of a break.  Oh dear.  We set off, passing Upper Heyford airfield (once the front line in the cold war) with a great view into the valley, nearly visible in the gloom.  Next Woodstock; there’s no problem finding a teashop there as the place is packed with them.  We shed water in an embarrassing way in the polite establishment we chose.  A few miles down the road we paused to visit Churchill’s grave in Bladon, touching in its modesty.  Blenheim Park is quite an obstacle to get round, so a bit of main road, and next we had a complicated network of lanes to navigate; tricky to keep checking the map when it’s raining hard.  We approached our lunch stop in Burford through several picturesque villages and the architecture and landscape was beginning to look like the Cotswolds.

Burford has a handsome broad main street and a sandwich shop here was a nice break.  The weather was picking up: it had stopped raining.  Then continuing down a superb single-track lane following the River Windrush, we passed through a string of delightful villages (Barrington, Windrush, Sherborne).  The original plan had been to continue in this direction to Northleach, but we were behind so it seemed sensible to cut a few miles off and head north to Bourton.  It was starting to be hilly.  Descending into Bourton on the Water, we had a quick break and a look round the village.  Then through Lower and Upper Slaughter and a big long climb into Stow on the Wold.  It’s not called ‘on the wold’ for nothing and is 800’ above sea level.  We settled ourselves into the hostel, pleasantly situated right in the middle of the town.  Refreshments in the local washed down an OK evening meal in the hostel.  I thought a few pints would help me sleep.  Communal sleeping may be a bit of a laugh in your youth, but for the older person, the repose it supplies is fitful, very.

A bleary eyed breakfast though was pretty good and soon we were off descending to the River Evenlode and the charming riverside village of Bledington, then on through Churchill to Chipping Norton.  What a handsome town.  We didn’t see any of the famous celebrity inhabitants; they must have all been in a different pie shop to the one we went into.  Next a long climb to visit the Rollright Stones - an impressive megalithic monument – then looping round through the hills to Hook Norton.  The brewery was belching out (is that the right verb?) a vast cloud of hoppy fumes.  A quick look around the museum and we were into the Pear Tree pub next door.  What a great pub it was and with a real live pear tree by the front door with ripe fruit on it.

After lunch we were heading back east towards Buckingham with not much prospect of a further stop ‘till we got there.  Avoiding main roads we took the lanes that brought us in the end to Stowe park and down into the town down a grand park avenue.  The Travelodge here was within walking distance of the town centre, so after settling in, it was into the town for the evening meal.
The following day we were on the home straight and the general feeling was that we would sooner get back reasonably early.  We were soon back in familiar country passing through the villages to Tring. A quick refreshment stop and we were off back to St Albans.

A very enjoyable trip in good company.  There was one spell of heavy rain and personally I preferred the Travelodge accommodation for getting a decent night’s sleep, pleasant though the hostel was.