A tour of the Green Belt around London

There’s hardly a car or house to be seen, yet we’re going to be less than 33 miles from the centre of London for the next 5 days.  Feelings of anticipation and slight apprehension have given way to excitement to be on our way.  A warm June breeze pushes us along.  It’s going to be an easy first day, from St Albans to Chelmsford, on our route around the capital. 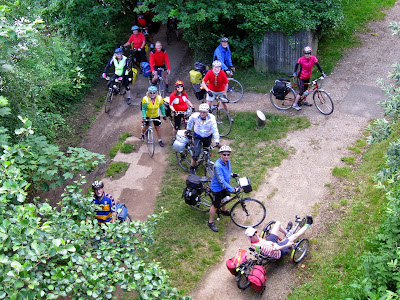 It may not seem that adventurous.  Our summer tours usually go as far from home territory as we can manage in 2 or 3 days: to The Cotswolds, Suffolk or Norfolk; somewhere rural.  But that was part of the challenge: to find out if it really is a green belt and find a scenic route within a stone’s throw of the M25.  I spent some hours route planning, aided tremendously by Google Maps for route plotting and Streetview for checking junctions, which resulted in detailed route sheets and GPS files that should mean no one could possibly get lost (or could they?).

We threw the tour open to both CTC and Forty Plus CC members and would be going through prime Forty Plus territory.  This made planning so much easier as I relied heavily on advice from Doug Nevell, whose previous London circuits had inspired this trip, and from Derek Hanson for the routes through Kent and Surrey.  It was also easy for riders to join and leave the route near where they lived.

Where to stay?  Fortunately, Travelodge rooms could be had for about £30 a night at Chelmsford, Maidstone, Dorking and Camberley.  This made booking a doddle as people could choose their own rooms online.  Word soon spread and we ended up with 26 people, but latecomers had a worse deal as room availability reduced.  All were CTC members and all but 4 were in The Forty Plus, so I had no worries about novice cyclists.
Our route turned out to be quite varied.  After crossing the river at Tilbury, the flat lands of Essex gave way to the North Downs in Kent and then a roller coaster ride through the Surrey Hills before crossing again at Windsor and back to easy riding along the Grand Union Canal.

We had a wide range of ages and touring experience and divided into a faster group, led by Carol & Steve, and a slower group, led by me, which eased pressure on cafes and allowed the faster ones to follow a longer or hillier route.  However, no one could avoid some long, scenic climbs south of London.  In fact roles were reversed on the toughest day, when the fast group ducked out of being sent on a circuit up Box Hill and ended up with under half the climbing as the slow group who had opted for Leith Hill, the highest point in SE England.

Thanks to Adrian, Bob, Carol, Gordon, Neil and Tony O’ for contributing photos – you can find them here: https://photos.app.goo.gl/X6qD4UkyF9jitH9C9.  Route sheets and .gpx files are available from me for anyone who wants to try this tour themselves.

Here is some feedback from those who took part:

‘Taking the ferry across the Thames at Tilbury.’
‘Passing the firing range at Gravesend – hearing the shots then hearing them hit the target (thankfully).’
‘Seeing the very rusty Black Widow Russian submarine in the Medway at Rochester.’
‘Visiting Rochester, with its cathedral, castle and impressive High Street.’
‘Thinking that perhaps the colourless liquid in Bob’s drinks bottle was not water because on two occasions he was witnessed falling sideways off his bike. The first time his fall was cushioned by his delightful wife, the second time his pannier was the saviour.’

‘Climbing Leith Hill, this was truly awesome. The place looked extremely ancient, it had a lush canopy of trees and the tree tunnel at the beginning is one of the best I have seen.  Once we reached the top there was a great view across the countryside.’
‘That chap I took a photo of in Southill.  He told me all about the Redhill aerodrome, he explained how all the huts were original builds; he was also very impressed at what we were doing. Lovely guy.’
‘Cycling through Windsor Great Park, although we could not figure out how to open the gates into the deer park, then someone spotted a green button.’
‘Having only one puncture to fix and just a few minor mechanicals.’
‘Enjoying a group meal in Dorking, with wine courtesy of Carol and Steve on their silver wedding.’
‘Tales like “Man Fun” and being ‘adopted’ by Dan & the Tonys.’
‘Eating every two hours, especially pecan pie.’

‘The cycle track from Gravesend was disappointing due to the poor surface.’
‘Mud clogging the back tyre on bridleways.’
‘Having to turn back on the bridleway with a huge fallen tree and stream blocking the way.’
‘The charming (!!!) young lady serving in the cafe at the golf club who graced us with her warm and friendly presence. As we were leaving I witnessed her throwing the dishes in the sink in a very aggressive manner. I tried to be pleasant and she glared at me. We all felt that perhaps this was not the job for her.’
‘Wetherspoons. Most were good, but one ran out of ordinary gravy, vegetarian gravy, rice and assorted vegetables, but apart from that and the exceedingly longwinded attempt at ordering and paying the meal was OK.’
‘Saying good-bye to Bob and Avis.’

‘Keeping up with 85 year old Len on the hills to Dorking’.
‘Climbing Leith Hill – never again!’
‘Buttock clenching along the towpaths.’

‘The landlady at the Old Crown in Edenbridge was very good to us.’
‘Super views from The Royal Oak at Staffhurst Wood.’
‘Best cafe was the place we visited in Windsor (The Top Twenty): free top ups, a free meal because they made a minor mistake, extremely quick service, very friendly and basically a pleasure to be in.’
‘Great value pub food at The General Elliot in Uxbridge.’
‘All the Travelodges let me take my bike into my room and Camberley opened up their laundry room too.’

‘Having a good back-marker to shepherd the group if it gets split.’
‘Bringing printed town plans showing hotel, shops, pubs and routes in and out.’
‘My overshoes worked well on the wet day. They kept the splashes from the traffic off my feet.’
‘Laminate your route sheets – no problem if it rains.’

‘Bring a lightweight jacket – it’s easy to overheat in June.’
‘Make sure your lycra is not see-through!’
‘Bring more fig rolls.’
‘Leadership on the road is not supposed to be an exercise in democracy.’
‘Ask everyone to set the date/time on their cameras, so photos can be sorted afterwards.’
‘Everything on tour is fun, take less luggage and don't take towels to a hotel.’


Quotes of the tour

Neil: 'York Minster was hit by Lightning'.  Jenny: 'Yes, that rings a bell'.

Jenny: 'I need to find a bush'.  Liz: 'Jean always knows where the good bushes are'. Jean: 'Yes, I'm a bush expert'.  Soon after this a young lad emerged from the said bush having covered his face in shock at what he had seen.  The friendly dog he was walking didn’t seem to mind though.