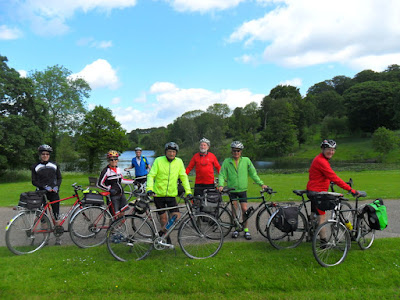 Eight people met at the Burton Central Travelodge on Friday evening and enjoyed a pleasant meal in the local JD Wetherspoon pub whilst discussing the planned rides for the next few days. The weather forecast was for dry but cold weather with some significant wind.

Saturday morning saw us leave Burton via a traffic-free cycle route over a Victorian causeway before heading south east to a cafe stop in the grounds of the Staunton Harold estate, then through some fairly urban countryside to Markfield, before heading into the wind NW to Melbourne, where unfortunately the Visitor centre cafe on the reservoir was closed this season. It was a real fight in the headwind back to base.

Sunday saw slightly less wind and offered a more pleasant ride through the undulating countryside to Uttoxeter before heading north to Alton (near the “Towers”) then south again to a tea stop at a pleasant NT cafe at Sudbury Hall. This ride was much hillier and we all knew the gradients had been quite severe. We used a pleasant off road cycle path from Alton village, which started just under an old castle that looked like it had been lifted from Bavaria and planted in North Staffs. The hills allowed us to see good panoramic views of the local countryside.

Tracey left us on Sunday evening so seven stalwarts headed north on Monday morning to Brailsford where the cafe had a hand written note saying ‘closed today’ so again we were thwarted for sustenance. After cycling north through beautiful quiet lanes we had lunch at Carsington Water visitor centre then took a hilly route, both up and down to a lovely garden centre cafe near Kedleston Hall before getting back to the hotel base.

Tuesday saw us using another traffic free tarmaced cycle route from Burton to head west to Rugeley before climbing up and through Cannock Chase on a track. We then went east to Fradley Junction for lunch where the Coventry and Mersey/Trent canals meet. None of us had realised what a large forest Cannock Chase is until we cycled through it. After lunch Steve H departed and the rest of us went back via the National Memorial Arboretum where we were moved by the scale and splendour of the memorials to the people who gave their lives in service for the country.

A well-signed NCR route 54 took us back to Burton from where we departed by car after a pleasant long weekend with no rain in surprisingly pretty countryside.