Unusual weather conditions were promised for the day - no rain at all. The destination was across the Chilterns and down the steep part on the other side to Longwick. It promised to be a longish way and hilly. But close to home was hilly enough as we cycled up from the Grand Union Canal and down and up Ley Hill. The way down the narrow lane to the Chess valley was gravelly and potholed and an encounter with a white van zooming up it was a nasty moment. Twisty, narrow lanes with gravel in the middle call for some anticipation, although the amount of traffic seemed quite low today. 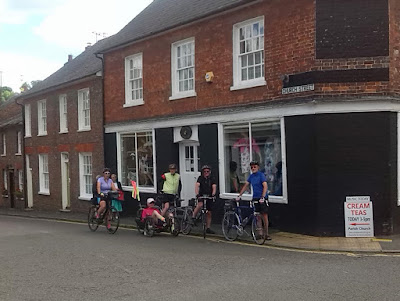 Passing through Great Missenden - too early for a cream tea

Another climb up to Amersham soon got us to the excellent Masterchef Cafe on Sycamore Road. From here we picked a fairly direct route to Great Missenden and then followed the very pleasant and quiet route along the valley, and after some miles a turning took us through the wooded hills to Askett. Soon we were down into the Vale of Aylesbury and into The Red Lion at Longwick.

After the lunch break the official route was to be back by way of Chesham, but we decided to wimp out of the climbing this would involve and went for a flatter detour by way of Stoke Mandeville and Tring. The cafe in the Natural History Museum made a very convenient cup of tea before we headed off for home earlier than I was expecting. It had been an enjoyable 60-mile ride in the ever-delightful Chilterns.